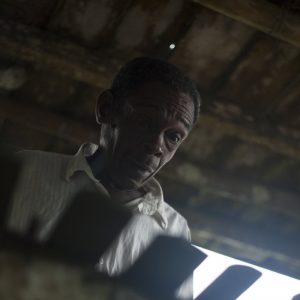 Dinastia Torres, The Torres Dinasty, are a family of musicians from the town of Guapi, Cauca. Cauca is in the south-west of the Pacific Coastal region, and is home to traditional marimba music and many infamous marimba players, such as Pacho and Genaro Torres, the two marimba players featured here. They belong to a long line of familial players of música pacifico, and recorded the entirety of this musical collection in their home, situated on the river bank in Guapi.

Described as “mystical currulao music from deep into the jungle of the pacific coast of Colombia,” there is no doubt, when listening to this album you will be transported to the Pacific jungle. Should this be your first venture into traditional currulao, Los Duendes de la Marimba, will definitely not disappoint.

Situated under the umbrella term of currulao, there are many musical rhythms and intricacies that fall under this genre, including arullos, bundes, jugas and currulao itself. Currulao is definitely the most infamous and recognizable musical genre, and the most distinct within the region of the Pacific Coast. The mystical music of currulao is centred around the marimba, an instrument that has been gaining a lot of commercial attention in Colombia through the rise of bands such as Herencia de Timbiqui, Canalon de Timbiqui and others. Through the success of bands such as these, Colombian pacific music has been propelled further into the mainstream, and further into the realm of pacific fusion music.

Dinastia Torres take us back to the roots of currulao and marimba music and to the traditional sounds born in the Southern Pacific Coast. “Adios Peregoyo” opens the album with the two marimberos interweaving the bordon and the requinta [the two registers of notes that are often played on marimba by two different marimba players] to produce a simple, yet layered conversation between the two players. Later, following the introduction of rest of the Conjunto de Marimba, we are introduced to call and response vocals, a musical technique that is highly synonymous with African-derived music.

Another musical technique that is symptomatic of traditional Currulao is the use of falsetto in the vocals. Nowhere on the album is this more beautifully represented than on “Mamita”. Dinastia Torres, while keeping the traditional elements of the song alive, pushes their work further with the esoteric vocals that are so characteristic of the South Pacific Coast.

The album moves into further territories of the various rhythms within currulao, taking us to “El Floron”, a very famous traditional song from both Choco and the South Pacific region. “El Floron” is representative of the bunde style, music usually accompanying a funeral or wake. A bunde, therefore, is much slower in tempo than that of a juga or bambuco viejo, for example, and overlooks the usual dancing style of some of the other forms.

Final track, “A Como Vende la Piangua”, is particularly poignant, a slow and melancholic track displaying the talents of the two brothers as marimba players. Sparse instrumentation is used here, producing a raw and stripped back showcase of the two most important elements of Pacific Coastal music: the marimba and vocals.