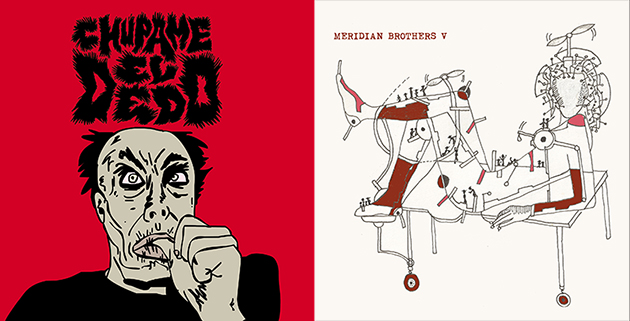 Discrepant Records have continued their work releasing experimental music with a wide geographical focus thanks to the recent and upcoming releases of two notable Colombian projects, Chupame El Dedo‘s debut album on vinyl, and the forthcoming reissue of Meridian Brothers‘ first-ever album on vinyl.

Chupame El Dedo is the project of Eblis Alvarez and Pedro Ojeda, two stalwarts of Bogotá’s underground music scene (where styles like jazz, rock, tropical and the avant-garde often collide). Chupame El Dedo is their moniker for incorporating elements of grindcore and black metal into a tropical rhythm section, subverting genres like salsa and cumbia in the best possible way. The project was initially commissioned by Detlef Diederichsen at Berlin’s House of World Cultures for a one-off performance, originally coming out as a cassette in 2014 and now being released as a limited vinyl edition.

The glorious discography of Meridian Brothers began with the release of Meridian Brothers V – El advenimiento del castillo mujer in 2005. After previously playing in bands such as Ensamble Polifonico de Vallenato and Sexteto La Constelación de Colombia in Bogotá in 1999-2001, Eblis Alvarez moved to Copenhagen to study music and this was where he began his Meridian Brothers project, exploring Colombian rhythms in an abstract manner, as Alvarez has stated in the press release for this reissue: “I was looking for a very abstract image of these influences, working a lot with the sound, but not in an electronic music fashion – looking for mainly weird results in rhythm and texture. My way of playing the instruments is not quite usual either, making a lot of small noises and deformed melodies.

Meridian Brothers V – El Advenimiento del Castillo Mujer will be released by Discrepant Records for the first-time ever on vinyl on 26th August 2016. You can pre-order the album from discrepant.net/products/574235-meridian-brothers-el-advenimiento-del-castillo-mujer.