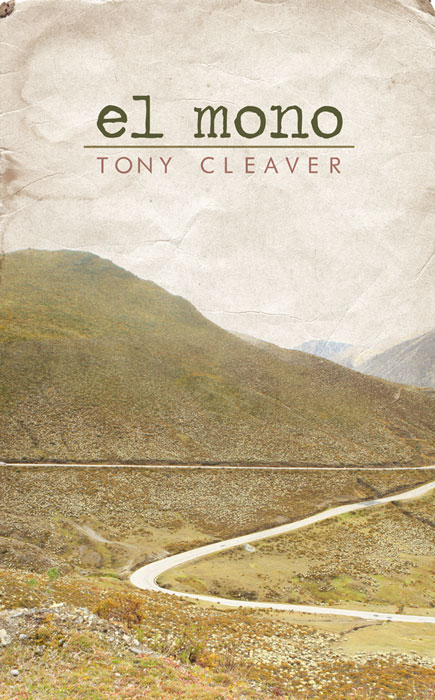 El Mono by Tony Cleaver, is an old-fashioned romantic adventure story interwoven with the vicissitudes of life in an often lawless Colombia.

British exchange student, Karin Roth, in Colombia to study at La Universidad de los Andes, Bogotá, is on a visit to her friend Claudia’s family finca, when she encounters the enigmatic shaman figure of El Mono/Daniel, whilst riding on the Páramo, high above Popayán. Who is he? She’s intrigued by this mysterious ascetic figure, this symbiotic embodiment of Pachamama. A blue-eyed, fair-haired man of few words who lives up there without so much as a Swiss Army knife.

The price of everything

The backdrop and subplot is the fate of the Colombian environment and the lives of indigenous people, in particular those who live on the Páramo, the starkly beautiful neo-tropical landscape above the treeline in the Andes, whose continued existence is threatened by mining companies.

The fixative which holds all this in place is the violent confusion created by the FARC and the paramilities (often in the pay of business or narco-traffickers) whose activities coerce the local population into making an invidious choice between one form of violence or another. Instability reigns, confusion creates opportunities and death is never too far away.

The story starts with a tragedy. James Mayor, an executive at mining company TMG (Transnational Mining Group), his wife, an academic and their 12-year-old son, Daniel, are going up into the mountains in the Parque Nacional Natural Puracé to stay at a chalet for the Christmas holidays, when their vehicle is blown off the road by a landmine. The parents are killed but the boy survives and is adopted by a family in Bogotá. Who is to blame? Is it the FARC?

Things then move forward to an impoverished but able student, Juan Sebastián Torres whose academic aspirations are brutally curtailed when FARC rebels press-gang his father and brother into service after shooting the local school teacher, Dr Jiménez, for talking out of turn. Juan Sebastián manages to flee but only as far as an illegal gold mine where exposure to mercury and sodium cyanide rapidly relieve him of his sight. He is forcibly encouraged to leave the mine by paramilitaries in the employ of mining companies and reappears later in Popayán working on a market stall with his cousin. Now referred to as El Ciego, the blind man, he becomes the ears of the city and the go-to person for information.

Thereafter the action focuses on Karin and her friend Claudia, fellow students at La Universidad de los Andes, and through various threads – including the kidnapping of Claudia’s former lover, Martín García (who’s been employed by Triple F), the execution of Diego Torres (El Ciego’s brother) and the mystery explosion that killed Hugo Rosas (a former goldminer friend of El Ciego and a security operative for TMG) – to the activities and power struggle between rival multinational gold mining companies, TMG and Triple F (Farming, Fishing and Farming Corp).

It’s a murky business presided over in the Triple F case by the psychopathic Morten Fields, a coterie of people on the same personality spectrum and his equally disturbing step-son, Leopold Smith, a hitman. Triple F and TMG are engaged in their own war of supremacy for government contracts and through them a dominant position in the market. They’ll do whatever it takes, so mendacity reigns and the casualties mount.

Field and Smith are malevolent archetypes and metaphors for the rapine activities they facilitate. Fields manipulates everything he touches and Smith is an unthinking golem-like creation who acts with extreme prejudice to order. However, he only obeys orders and is so flummoxed when things go awry that he is known as “the nuclear option”. Fields, on the other hand, is a cool, calculating, incorrigible schemer who brooks no opposition.

Meanwhile, Karin and Claudia are taken on as interns for the charming Morten Fields at Triple F. Karin, something of a post-gap-year ingenue who ought to know better, is employed by Fields – a serial impregnator of secretaries – as his PA. She sees glamour and career prospects. He sees opportunity.

Karin was enamoured of the “Heathcliff” of the Páramo but not enough to forego the cheesy attractions of Fields and all the accoutrements that come with corporate living; the trips to glamorous places, First Class air travel, Five Star hotels, champagne, matching ball gowns and hand bags, platitudes, etc. She’s a moron, of course, but when it comes to the dubious attractions of Fields – she’s more on than off. However, something is gnawing away at her. No, it’s not red ants or an allergy to chlorine, it’s the realisation that attraction and love are not the same thing.

Having had a child by Fields (Peter) and marrying him, Karin quickly realises – thanks to Field’s ex-wife Thelma Marshall – that he’s a bastard and he’s been stringing her, his secretaries, his colleagues, his superiors and just about everyone else along. She has to escape his clutches. But Fields being of the psychopathic persuasion with narcissistic highlights doesn’t take too kindly to being told he’s a dangerous, psychopathic, narcissistic dud whom she’s going to dump. The unquestioning, obedient Smith is unleashed again.

Paramour on the Páramo

She returns in desperation with Claudia’s assistance to her fledgling first love, the charismatic El Mono/Daniel, after seeing him on a National Geographic broadcast, organising the local livestock up on the Páramo into an effective protest at plans to turn the place into a toxic rubbish dump complete with a gold mine, no indigenous people and a contaminated water supply. The hunt is on. El Mono/Daniel is a marked man.

In the frantic climax the hero is seemingly wiped out, along with Karin and Peterw when Fields sets Smith and another henchman Cortés onto them. Yet all is not as it appears.

A desolate Karin flees the menacing Fields and returns to England, to her mother’s home in Berkshire, believing El Mono/Daniel to be dead. She works briefly in the City before taking up a position at the International Office at her old alma mater, Durham University. It’s there that she gets a startling call from Claudia which turns her world upside down again. She returns to Colombia. Fields is up to his usual tricks and it’s clear that El Mono/Daniel has risen from the dead. The race is on…

What can the powerful symbiotic relationship between the El Mono/Daniel and the creatures of the Páramo do? Will Karin and Peter be reunited with him? Does Triple F stand for f-f-failure? What is Smith without Wesson? Will Fields be all at sea with Cortés? Read it and find out.

Cleaver has set out to do a difficult thing. He’s trying to weave a cautionary tale into a romance and he doesn’t bring it off. The story rattles along at a good pace with twists and turns and is entertaining, but in the end the hero, El Mono/Daniel, doesn’t convince. He’s like Conrad’s Nostromo – there – but not really fully formed. He starts off with an almost Jain-like sensitivity to nature that mourns a frailejón plant trampled on by horses, yet is seemingly indifferent to all but the indigenous people he sees sporadically. He scorns much of humanity outside his particular milieu, largely because his own solipsism is driven by rejection, feelings of inadequacy (real and imagined – he’s illiterate) and his seeming inability to form relationships, notably with women who might drink Pinot Grigio, wear high heels and like shopping.

When Karin says, “There was nothing more attractive than a man who seemed to need nothing and no one, and who was so unhurried and comfortable in his own skin,” you realise she’s a prize chump. She can’t seem to see him for what he is. Who knew that Mills & Boon could live at such a high altitude?

A man who doesn’t need anyone cannot really be a man – a rock or caricature maybe – but definitely something less than fully human. The female characters, in contrast, are better wrought and more believable – and if not profound when they open their mouths – they do sound more like people of their ilk than some gap-year student who’s been lost for a decade.

Creating a desert and calling it progress

What the story does do, very convincingly, is expose the idiotic hubris and greed whose machinations irreparably destroy natural beauty in the service of a lesser god – mammon. Humanity, though, is a bit slow on the uptake. Despite the cautionary tales of Midas and Croesus, we still fail to take on a message that’s literally 1,500+ years old and counting. Whilst Joni Mitchell put it so aptly in “Yellow Taxi”: “You don’t know what you’ve got till it’s gone…” those people who do know are too often silenced in one way or another by the greedy and purblind.

Cleaver has a tendency to take the horse to water and tell it what to drink. El Mono/Daniel’s speech on fatuous materialism need not really be stated. His character already exists as a counterpoint. The fact that he’s chosen to live where he does speaks for itself. After all, you aren’t going to live in the isolation of the Páramo if you can’t live without televised football, male grooming products or Taco Bell, are you?

The story serves as a cautionary tale, too. The beauty of places like the Páramo is fragile and it can’t survive being rendered into a crumpled, pitted moonscape desertified by toxins, criss-crossed with tyre marks, depleted of people, flora and fauna.