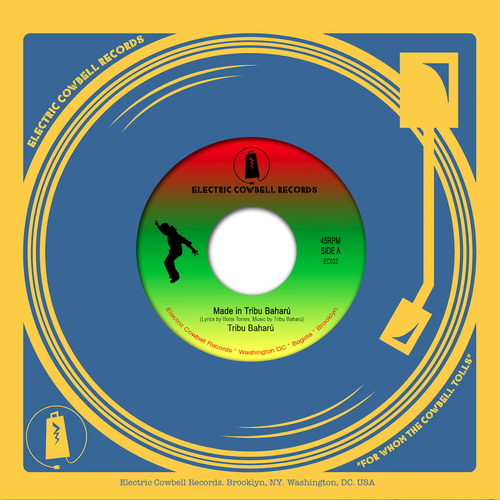 For many of us out there, record store day (April 22nd) is a must have in the ol’ musical diary. Whether a blue-tack equipped hipster with an appealing empty wall or an avid vinyl collector, it’s a day with exclusives a plenty. One such gem hitting stores will be this exciting Electric Cowbell Records’ limited-edition release. A 45RPM 7” single “Made in Tribu Baharú” by Colombian collective Tribu Baharú, with a digital release on March 10th for those computer-content collectors amongst us.

This Bogotá afro-champeta sextet, founded in 2009 boasts equally intriguing backgrounds, from grandmother film star collaborations with Marlon Brando, to grafting away from the tender age of ten. Their sound evolved from the Colombian Caribbean and is influenced by the intriguing picó culture (watch a short documentary about it here). Tribu Baharú’s primary objective? To transmit the joy of the ‘Caribbean being’ through dance, using music as a vehicle. An objective achieved in their latest groove activator.

The A side, “Made In Tribu Baharú”, is no other than a dance-driven, chant-chirping, smile eruptor ; whether played on a sun-glazed Colombian beach or a dingy box room nestled in a smog sodden city centre. The B side has “Pa’ tras” on the menu. A slower melody driven track with riffs the many, twisting and turning in sheets warm with sonic positivity. All in all, this flavoursome Colombian dish of the day delivers a succulent serving to sink musical teeth into for all you global music fans. Don’t miss out.

The Made in Tribu Baharú 7″ is available digitally on Bandcamp and will be released in 45 format on April 24th for Record Store Day.