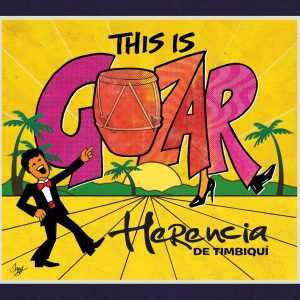 I hadn’t heard of Herencia de Timbiqui until last year. The group formed in 2000, consisting of 11 Colombian musicians from the town of Timbiqui in Cauca, on Colombia’s Pacific Coast. Their previous album Tambó projected the group to fame – they were awarded the Gaviota de Plata at Viña del Mar (Chile) in 2013 for their rendition of “Amenecé”. Their sound is a unique blend of traditional Pacific Coast-inspired rhythms with a rock/pop/funk edge. Unlike their contemporaries, Herencia are still very loyal to the more traditional elements of Pacific music – think currulaos, bundes and abozaos! In case you’re not familiar with the marimba (a type of wooden xylophone) bombo drums or guasá shaker these are the key instruments in the group’s distinct sound. With the aid of guest producer Will Holland (aka Quantic), their new album This Is Gozar has a more polished sound, at times with a slight Fruko or Grupo Niche flavour.

The disc opens with “Que Es Que Le Coge” and Herencia’s unique sound of juicy marimba riffs with funky electric guitar in a poppy upbeat track. My personal favourite, “Amanecé”, is a gorgeous track, involving vocals from all the group’s members, and paying tribute to life on the Pacific coast as the dawn breaks during another day. “Aprendí” uses a traditional currulao rhythm, a love suffered and lost which isn’t far from a modern twist on a Garcia Márquez-inspired story. The disc then picks up again with “Fin De Semana”, a fantastic big band salsa with clever lyrics inferring Colombian salsa capital Calí’s hectic black night-life.

“Ironía” is another favourite, a calypso/reggae-sounding track with lyrics describing the search for love in the Chocó. Not forgetting of course the album’s title track “This Is Gozar” with a brass section straight out of New Orleans. Herencia certainly know how to “gozar!”

“Parió La Luna” is a jazzier, sexier version of a traditional Pacific song, whereas “Tormenta” is a direct nod to the black Colombian Coast (think Ale Kuma) with a fuller sound and haunting repetitive vocals. “Negrito” is produced by Quantic and it has his distinct touch; it’s fresh and incredibly tight. Piano and marimba provide the accompaniment to a large orchestra and powerful vocals. This is all prior to the album’s final track “Afrika’. Think Afrobeat and a slight Femi Kuti vibe. The band wrote this track during their trip to Zambia and Zimbabwe, alongside traditional musicians and the talented Ebo Taylor providing lead vocals.

This is Gozar touches both Afro-Colombian and African crossovers; it is a mouth watering pot of flavours and sounds, the lapping of the Pacific ocean on sandy beaches and a light sea breeze. Welcome to Colombia!

This Is Gozar! is available from Amazon (UK), Amazon (US) and iTunes