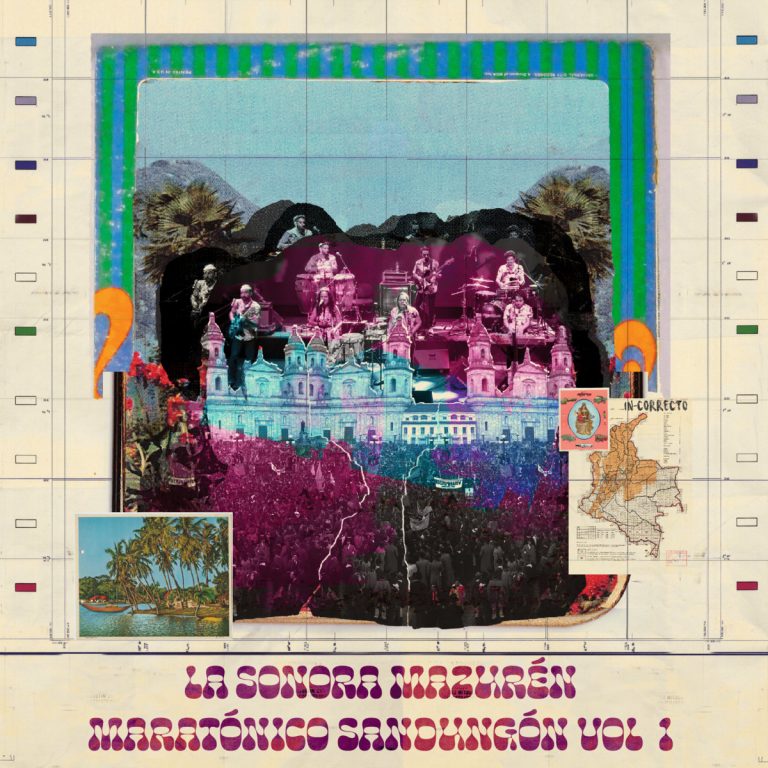 This first album by La Sonora Mazurén, Maratónico Sandunguero Vol. 1, is literally a marathon of energy, an explosion of joy and a call to dance so much pandemic lockdown out. The marathon begins its journey in Bogotá, at Latino Power, where an exalted audience prepares to go through tropical-urban arrangements of some classics from the golden age of psychedelic cumbia. Just like the last single “Tiro al Blanco,” this album promises to be an inter-selvatic experience: a dialogue between the chicha of the Amazon jungle and the rebellion of the Bogotá cement-jungle.

There are eclectic and electric covers of Peruvian psychedelic heavyweights like Manzanita y su Conjunto and Polibio Mayorga alongside Colombian tropical cumbia heavyweights Lisandro Meza and Carlos Román. La Sonora Mazurén’s musical and energetic proposal is evident in the song of their own composition, “Cangrejeando en el Apocalipsis”, an ode to polyrhythms, lysergic melodies loaded with heartbreaking keyboards, distorted chords and a cathartic high tempo. Although especially in this truly apocalyptic period we all feel a bit like walking like crabs, sometimes taking two steps forward and one step back, this album seems to invite us to let go of the uncertainties and splash them with colours. So: On your marks, get set and dance!

Los Rulos Vinyl Club are a self-managed group of women organized around a love of good music and vinyl collections. Currently, they are in their third year of work as a collective and, if you think about the very masculinized musical environment, especially in Bogotá and Colombia as the place of their operations, it is clear that the effort of these women to support themselves and grow as professional music lovers, is unique. In addition, they have joined the celebration month of ungovernable cumbia by releasing a weekly mixtape to make their offering to this multifaceted, nomadic and most polymorphous musical genre of the place called Latin America.

In this fourth mixtape of the month, Cheetah Latina pays tribute to one of the most controversial, cathartic, messy and explosive arms of cumbia: the psychedelia. In half an hour, this selectress tells us a mainly instrumental story, whose narrative thread is more to be found in the electric melodies and distorted guitars, keyboards and accordions than in the lyrics. While we’ve already learned that cumbia unites us, Cheetah Latina goes a bit further, leaving a record of the “psychedelia that unites us” as well in this careful selection that covers songs from the south to the very north of the continent.