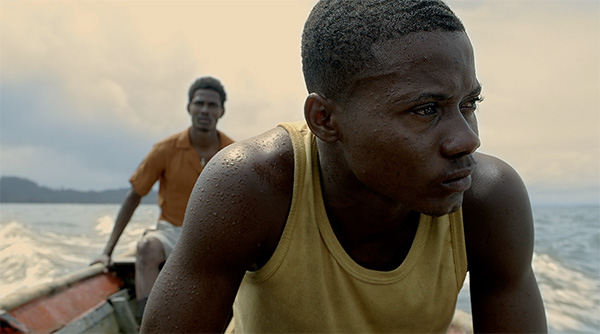 Tackling the drug trade on Colombia’s Pacific coast, Josef Kubota Wladyka’s debut feature film Manos Sucias is a deeply affecting portrayal of the violence and desperation wreaked by narco-trafficking. Executive producer Spike Lee’s name is not out of place on this gritty, tense drama as it throws uncompromising light on issues of crime, poverty and race. It is Wladyka’s story-telling, however, that makes this film unique: sparse dialogue, minimal characters and a focus on personal relationships create an exceptional treatment of Colombian drug violence free from both cliché and glamorisation.

Manos Sucias follows naïve teenager Delio (Cristian James Abvincula) on his first experience of drug running, as he joins his formerly estranged older brother Jacobo (Jarlin Javier Martinez) on a mission to transport a torpedo of cocaine from their home city of Buenaventura up the Colombian coast. In contrast to his younger brother, Jacobo is jaded and looking to move to Bogotá to escape this lifestyle: the viewer eventually learns that the drug violence of Buenaventura has cost him the ultimate price.

The contrast of Jacobo’s tension and sadness with Delio’s wide-eyed enthusiasm serves as a warning of things to come, as events unfold that destroy the latter’s innocence forever. Nevertheless, the juxtaposition goes two ways and also forces Jacobo to soften. This relationship between the two brothers, and the personal development it engenders, is one of the most striking elements of the film, deftly handled by Wladyka: subtle enough to avoid becoming saccharine and strong enough not to be overshadowed by the film’s violence, action or wider political themes.

As well as brotherhood, Manos Sucias highlights issues of race, poverty and culture against the backdrop of the Colombian drug trade. Buenaventura, the impoverished port city where the film begins, has a population of around 85% Afro-Colombians, and the issue of race peppers the film, from discussions on football that take a disturbing turn to the refrain that “there are no black people there” whenever Jacobo discusses his plans to move to Bogotá. The viewer is neither preached to nor shielded by this subtle handling of the complex matter of race in Colombia, emblematic of Wladyka’s unflinchingly realist, sparse style and his refusal to comfort or coddle the audience.

Regional culture also takes a prominent position in the film, mainly through music, with Colombian salsa stars Grupo Niche’s “Buenaventura Y Caney” playing a climactic role. This song is not only symbolic of the easing of tensions between the brothers and a celebration of the culture of this region, but through the refrain “A Nueva York hoy mi canto, perdonen que no les dedico” the message that this is a film concerned primarily with a Latin American story, rather than US audiences or Hollywood, is underlined.

Manos Sucias’s combination of broad socio-political themes and intimate, personal experiences is conveyed by its cinematography as well as its narrative. The majority of the film is shot on either the wide, open sea or in claustrophobic spaces, such as inside the pair’s small fishing boat or in the dense swamp and jungle of the coastline. This invokes both the broad, seemingly boundless reach of the horrors of drug violence and its oppressive encroachment onto even the smallest areas of life. A sense of tension and imminent danger also permeates the film’s style: one of its most disconcerting shots is the view from the perspective of the drugs container, speeding along just under the surface of the calm water like a marine predator.

Wladyka’s debut is extraordinary in its ability to portray narco-trafficking’s brutal devastation of lives, families and entire regions of Colombia without diminishing the culture, vitality and private narratives of the communities affected. In combining complex socio-political themes with intensely personal experiences, Manos Sucias provides neither judgement nor consolation to its protagonists and viewers alike, and is all the more disquieting for it.