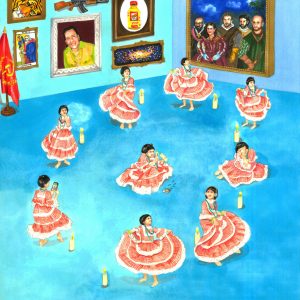 Colombia’s Meridian Brothers have something of a cult status, famed for their own unique take on a variety of Colombian genres – supercharged with keyboards, synths and a poppy-punky edge that is both mesmerising and slightly maddening (in a good way). The latest project from Eblis Álvarez: Cumbia Siglo XXI is a high-octane 1980s-respecting take on Colombia’s most iconic genre, cumbia.

Far from trying to emulate the original sounds, Cumbia Siglo XXI gives them a new, funky lease of life. I’m really not much of a creator,” says Álvarez. “I’m more of an imitator. I copy things and transform those copies. I don’t have a very original spirit.” Think Afro-Caribbean rhythms alongside synth-pop sounds, it shouldn’t work, but it does. This is music to get you up and on your feet.

It won’t take you long while listening to the album to come across “Cumbia del Pichamán”, a unique take on Dusty Springfield’s “Son of a Preacher man”. Think a tropical take on a much-loved classic, mastered in such a way that it sounds fresh and new. This is pure Meridian magic.

But it’s not just the music; the lyrics on Cumbia Siglo XXI are deeply connected to the country’s current state of affairs, questioning societal codes of conduct. “Cumbia de la Igualdad,” is a light-hearted response to how wanting to do good can often cause more conflict than good. While “Cumbia De La Fuente” is a space-age take on traditional rhythms, plus don’t miss the animated video, featuring work from Bogotá illustrator Glenda Torrado.

“The song is a prayer and an amulet, a search for something that modern human beings are not used to [doing], due to mechanisation and modern industrial societies,” Álvarez comments, a blast from the past with a new injection of sound – while age-old problems continue to cause the very same issues that we are trying to resolve.

Cumbia Siglo XXI isn’t just an album for die-hard Meridian Brothers fans or Cumbia-loving music moguls, it’s a critique on the society that we live and exist in. It’s fresh, funky and keyboard-filled madness. While being both weird and catchy enough to charm your ears and provide some foot-stomping fun.

Find out the influences behind this record with our article Under The Influence: Meridian Brothers