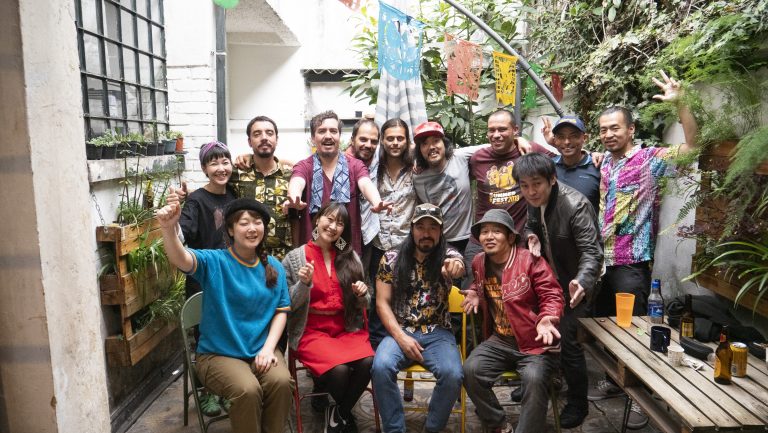 Last year we introduced S&C readers to the unlikely occurrence of Japanese cumbia.

Unlikely perhaps, but certainly not entirely new: “we’re not the first ones [to mix Japanese minyo with cumbia], it has a history. It [was] a long time ago when Japanese musicians started to figure out how to put Japanese traditional music and other countries’ music together”, Minyo Crusaders’ Katsumi Tanaka told us at the time.

After the group had linked up with Colombian’s Frente Cumbiero in 2018’s Fuji Rock festival, the next step when the Japanese group came to Bogotá for the Colombia Al Parque festival was a recording session between the Crusaders and Frente, a partnership now dubbed Minyo Cumbiero, with a 4-track EP from the group due out on Mais Um in July.

The result is an absorbing mix of Japanese folklore-cum-cumbia on the first track to be released from their collaboration, “Cumbia del Monte Fuji”. The clarinet-led melody adds full Nipponese flavour while bolstered by horns and the unmistakable cumbia beat.

Accompanied by an excellently shot video of the session recorded in Bogotá’s Mambo Negro studio, nestle in for this excellent cross-cultural, Japanese-tinged fandango below!