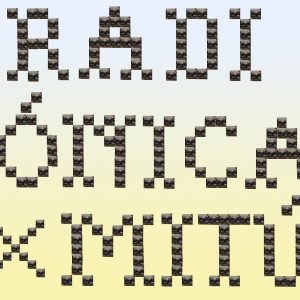 Mitú duo, Julian Salazar and Franklin Tejedor, are back with another exploration of their Colombian musical roots and electronic fusion with their latest album, Acinoidar X Utim.

Mitú is a Colombian musical project that was born out of the band’s love of Afro-Colombian rhythms and inspiration from the country’s jungle areas. Branded as ‘Techno from the Jungle’, Mitú have developed a signature sound, fusing traditional rhythms rooted in the history of Colombian music with modern electronic and digitally enhanced forms. Since the release of their debut album, Potro (2012), Mitú have gained a significant following within the alternative music scene in Colombia.

With the release of their most recent project, Acinoidar X Utim, Mitú have pushed their experimental style further into newer and more exciting realms. Presenting us still with their signature Afro-Colombian fusion, Acinoidar X Utim is one of the band’s most exciting projects.

Each of the songs, named numerically from Uno to Ocho, explore a variety of traditional rhythms from various geographical areas of the country, each with a support of synthesized, low key electronic beats.

“Uno” perfectly encapsulates the ‘Techno from the Jungle’ undercurrent that Mitú is famous for. The electronically enhanced snippets hint at the birdsong found within these territories, placing us within the magical landscape of the Colombian jungle.

“Dos” is where we really hear how Franklin Tejedor is influenced by growing up surrounded by the music of San Basilio De Palenque. A significant piece in terms of Tejedor’s percussion influence within the band, “Dos” perfectly infuses the heavy drumming of Afro-Colombia with an infectious, esoteric electronic track. The addition of the dream-like guitar track gives us a look into the musical mind of this experimental duo.

“Seis” is certainly one of the band’s most left-field pieces on the album, and a must-listen for any heavy electronic music fans. It makes use of substantial synthesized tracks and disparate, yet protruding sounds that have become so well-known within Mitú’s sound. This multi-layered syncopated track is one that pushes Mitú’s already fluid boundaries into new and more explorative territories.

It is with the concluding piece “Ocho” that the entire album is perfectly resolved, utilising the Afro-Colombian rhythms and electronic themes intermittently heard throughout the previous parts of the album. “Ocho” stylistically brings Acinoidar X Utim to a polished conclusion, leaving the listener in a state of total musical satisfaction.