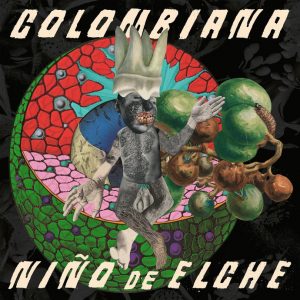 A classically trained flamenco musician, Francisco Contreras Molina routinely turns his ear to alternative styles, traditions and perspectives. His music has opened minds over the years in his presentation of flamenco as an accessible and living art, in finding political links between the most essential ideas, and through using the dexterity of his throat and body to make music.

As the most recent album’s name suggests, Colombiana is an exploration into the deeper links between flamenco and Colombian and other Latin music styles. African rhythms travelled along with people and produce to be introduced into Spain, where they found themselves adding sabor and ritmo to flamenca guajiras, milongas, the soleá, seguiriya and of course the fandango. Colombiana is thus a continuation of the fascinating journey between these two worlds which hasn’t been much explored over the years. “Colombiana Vasca”, for example, presents Bilbao as a hub of movement and ideas. The track is a cacao-port cumbia featuring vocals from the revered Basque poet Maialen Lujanbio.

The album is a 37 minute-long trip: satirical, shocking, humorous and experimental. I would be lying if I said it were a completely enjoyable experience. It is at times jolted, gratingly repetitive, ugly and tongue-in-cheek, but mostly very interesting. This is an album for active listening.

The writing and production of Eblis Álvarez (Meridian Brothers, Los Pirañas) rings clear and assured on each track of the album. His artistry and intuition in the more psychedelic, electric and exotic sounds encourage and flirt with El Niño’s freakiest side.

Uncovering musical histories whilst staying with Elbis in Bogota cemented for Francisco the fact that “Flamenco is about a journey, it’s about leaving and returning”. This was the route taken by sugar, coffee, cacao, rum and cane, as well as cocaine, ayahuasca and LSD. The album’s psychedelic tracks speak of drugs, colonialism, maize and cacao, labour, prostitution, slavery and more. “El Vendedor de Caramelos” for example, links the vendedor ambulante – a street vendor often selling sweets, cigarettes and gum – with our ambivalent outlook on the commercialisation of drugs.

The opening track begins with a cynical wail in anticipation of darkness. The beautiful and intriguing line is a verse from David Castillo’s poetry. “Mamá, Mamá” El Nino sings, “Me voy a cagar en el muermo”. It at once relates to a trip, to the flamenca soleá, the uncertainty of a journey, of slavery, of expulsion. It’s a trip that rings true in both the history of southern Spain and Latin America.

“Oracion Militar” is immediately ironic. The electronic marching drums are repetitive and at times shocking and jolting. Moments of gabber and the clashing line that El Nino almost shouts – “morir, vivir, morir, vivir, morir, vivir” – are brought back into a marching procession of orders, demonstrating how the religious and military worlds exist hand in hand, markedly in both Colombia and Spain. The track is similar to a saeta, the emotional and religious Spanish song often sang in processions, but with a colombiana melody, highlighting the links, chains and clashes between these two interconnected worlds. There’s a freaky, mocking tone to the track – the music excites like a Coronel on an ego trip, but with awareness of the satire. “There’s nothing more psychedelic than the religious and the military. There’s no trip quite like it,” Paco elucidates.

“Peteneras Mexicanas”, my favourite track on the disc is fun, punchy, feisty. Contreras Molina documents the connection of the petenera flamenco style to Mexico. This type of song typically speaks of an ill-fated woman, guilty of sending men to damnation for her evil powers of seduction. The female voice on the track is playful, assured and tricksy, poking fun at the classic “petenera, mujer mala” sterotype. Traditionally these compositions sing about night-workers and prostitutes. El Niño, along with Álvarez’s group Los Pirañas, and Daniela Sanmiguel, drives the track, enveloping krautrock and trance in the production, showing environments where women party at night.

Other tracks reimagine the famous Colombian phrase, “ni chicha ni limoná”, or present a psychedelic ayahuasca experience: “Trágatelo”, El Nino coaxes theatrically, taking us on his trip with tongue-in-cheek lyrics. Francisco claims that to make the album he had to overcome European prejudices about Latin culture. Perhaps this track is a jeer at how we envisage an ayahuasca trip. Perhaps he is really tripping! Either way, the production is fantastical. The two have created a great listen, full of life and satire. It’s also been described as a musical work of archaeology.

Colombian is available on Spotify, Amazon UK and Amazon US.