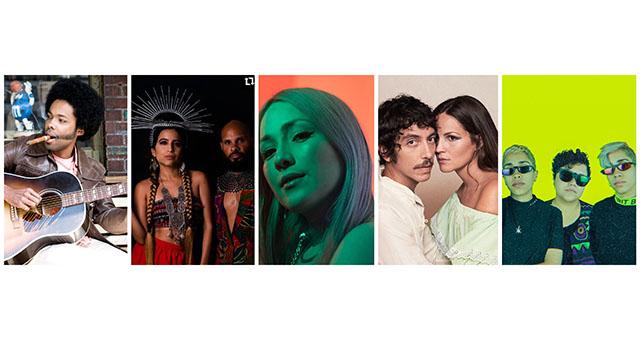 September has brought us many new tunes by artists we dig and this edition of ‘On our Radar’ is all high-energy. Let’s get to it!

Now available on itunes and Spotify, the new single is a moody dembow with a release and let go. It is the third of a series of singles MPEACH has co-produced with long-time collaborator Jimmy Flamante. The duo incorporates a soundscape that is influenced by a cross-pollination of sounds from Latin America, the Caribbean, North America, and Europe.

The Brooklyn-based Strings N Skins, who describe themselves as “Colombia meets Haiti in Brooklyn,” have a fun new song, “Star Power,” and it’s inspired by the thought of every person born on this planet having their own destiny, said emcee and percussionist Okai Musik.

“One of the lyrics in the song is, ‘Out of a hundred million sperms, I swam the fastest, live it to the limit till they put me in that casket.’ I’m trying to inspire people to control your own destiny,” he told us. “In order for you to rise, you don’t have to step on the next man because there is an abundance of whatever you are trying to get or achieve.”

Puerto Rico’s Buscabulla (Raquel Berrios and Luis Alfredo de Valle) returned to Puerto Rico shortly after Hurricane Maria struck the island in 2017, which sparked their creation of PRIMA, a non-profit organization dedicated to raising micro grants for independent Puerto Rican artists. (The org was covered by the New York Times.)

“Vamono” is the first song both written and conceived once the married couple arrived on the island. They describe it as a rally to those who have returned as well those whom have left. “It’s an urgent reminder to connect with your history, your roots, your very own self,” they said in a press release.

The “Vamono” video recreates one of Puerto Rico’s legendary parades as part of a larger metaphor. “With the mass-exodus of Puerto Ricans to the mainland US as well as economic decline accompanied by displacement of our people and traditions, we hoped to capture the essence of these festivities, which by their very nature and existence are a form of celebratory resistance,” they said.

Alex Cuba has made a home in the far north of British Columbia, far from the Cuba of his birth, but his music is always distinctly Cuban. His new album, Sublime, (out on Caracol Records) has collaborations that are odes to his beloved home country.

He teamed up with some of Cuba’s brightest lights: Pablo Milanés, a founder of the Nueva Trova sound; Omara Portuondo, the vocalist of the legendary Buena Vista Social Club; and singer-songwriter Kelvis Ochoa, the Cuban vibes king. “This album has the most important duets of my career,” Cuba said.

Listen to “Cuidad Hembra (La Habana),” which describes the city of Havana as a frenetic woman, featuring Ochoa, below.

Dave Nada, the veteran DJ who invented moombahton about a decade ago, and longtime collaborator, DJ and producer, Jesse Tittsworth, started their own label, Hermanito, earlier this year. The duo with fantastic hair (we’re seirous) teamed up with the Dominican Republic’s MULA, a powerful group composed of Anabel Acevedo, Cristabel Acevedo, and Rachel Rojas, for “Tu Encontré,” the lead single off of Hermanito label’s Moombahton 10 Year Anniversary album.

Nada tells us he met the trio in Ecuador last year thanks to his wife, Marion’s, television show on TeleSUR (watch the moment here), which was filming in the country at the time. “They are three queer women from Latin America that are championing this new wave of dembow and are big fans of moombahton. We were all super excited to collab and it’s definitely the direction I’d like to see moombahton go more in the future.”

We agree. Listen to “Tu Encontré” below.