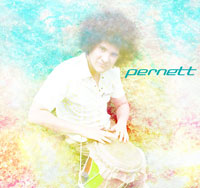 We really couldn’t be any more thrilled to have the presence of Humberto Pernett on Sounds and Colours. In recent months we have covered Choc Quib Town, Bomba Estereo, La Mojarra Electrica and Systema Solar, all of whom have been helping to shape the sound of Colombia by mixing traditional rhythms with elements of pop, rock, hip-hop and other latin elements. However, perhaps none have managed to create as distinctive a new sound as Pernett. After releasing five albums Pernett has already gained a reputation as a unique performer, producer and writer, mixing cumbia, soul, folklore and a multitude of Colombian and Latin rhythms with his own unique voice. In what might be called the “progressive cumbia” or “nu cumbia” movement Pernett has to be one of the front-runners.

Below we have a podcast created by Pernett himself, collecting together a number of his songs, including a perfectly-judged cover of “Blue Monday.” As a special treat Pernett has allowed for the download of his first three albums, for those truly looking to enjoy the Pernett magic. You can download those albums HERE.