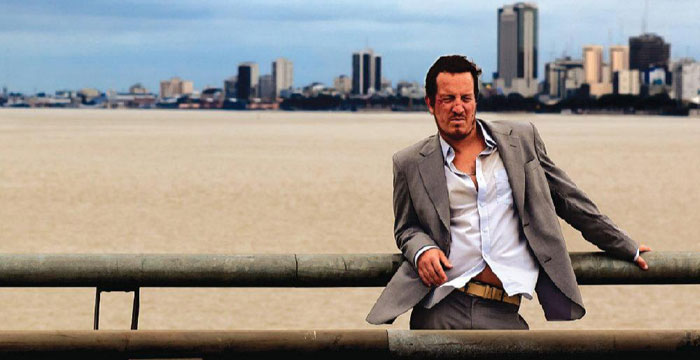 Pescador makes no attempts to sidestep the well-trodden cliché which says that lives in South America are never far from the drug trade. Fortunately for those who are sick of such generalisations, the story is at least based on a real event (and a book by Juan Fernando Andrade) and tries to show what happens when the ordinary people – and not the professionals – do get involved in the sale of illicit white powder.

One morning, Blanquito wakes up late, as usual, for his early morning fishing job to find the boat’s progress into the sea hampered by a wooden crate stuck in the sand. Upon closer inspection the men find that it is tightly packed with phone book-sized chunks of cocaine. The ebbing tide reveals a beach full of these illegal treasures and the fishing village locals quickly set about beach-combing, amassing hordes of the stuff.

During this scene, the director uses a strange choppy effect which also crops up in later montage sections of the film. The frame rate looks as if it has dropped down to only a few per second, almost as if you were streaming on a shoddy broadband connection. As well as being a unique little stylistic flourish, it’s jerky nature wakes up the eye and forces you to look at the scenery and characters’ faces in a slightly different way.

The next day, the police arrive to advise everyone to hand in whatever stash they may have found, and remind them to not sell it to any unsavoury types who might be after payback for their damaged shipment. The authorities dish out some pretty patronising advice: “One must fear drugs as one does the ocean,” which we can only assume is an attempt to appeal to these simple people’s fearful pagan instincts. But the population are more entrepreneurial than that, and they end up completely ignoring the official advice to form an orderly queue under cover of darkness to make exchanges for cash with the local drug gangs.

Although Blanquito seems to work multiple jobs, he is still regarded as a bit of an unreliable slacker by the villagers, who only tolerate him because of their respect for his mother. He spots his chance to get out of the village for good by realising that the street value of the stash is worth significantly more than what the gangs were offering as finder’s fees. The other villagers don’t care and are happy to make a quick buck. The next day, a huge sound system and stacks of beers are rolled in while BBQs are lit for a massive celebration.

During all this, Blanquito prepares his escape to the cities with Lorna, a new acquaintance who he met while delivering groceries to the fancy house of Don Elias: a suspiciously rich man with no discernible legal business. She agrees to use her contacts to help make a profit and the unlikely pair set off on the type of road trip in which South American film excels.

Cinema from the continent is perfectly poised to do this not only because of the beautiful varied countryside and the vast expanses which can be covered, but also because there are such significant chasms of difference between economic situations. Between the rural and the urban and between the slums and the penthouses there a loads of great contrasts to explore and our fisherman is the perfect character to be thrust into the middle of them.

Blanquito, as might be guessed from his nickname, has never quite been able to shake the idea that he is somewhat different from the villagers in some sense, although they would not agree:

“You’re the same as everyone else here. Or do you think that you’re better because the sun makes you red?”

So, though Blanquito was never quite settled in El Matal — always looking to elope, evolve or escape — he also doesn’t quite fit in with Lorna’s contacts either who all wear expensive suits and use rolled up banknotes more often than they use cutlery.

Sebastián Cordero wanted the film to be more about ordinary people having to make big choices rather than the narco trade in its wider context, and this he has achieved in a film with few plot clichés and some likeable, if flawed, characters who leave you guessing what they are going to do next until the end. Those who want an all-guns-blazing-crime-epic might want to look elsewhere, but it certainly won’t disappoint anyone interested in seeing how ambition and opportunity affect a young sunburnt Ecuadorian fisherman.

Pescador is showing on Wednesday 13th March 2013 as part of the ¡Viva! 19th Spanish and Latin American Film Festival in Manchester