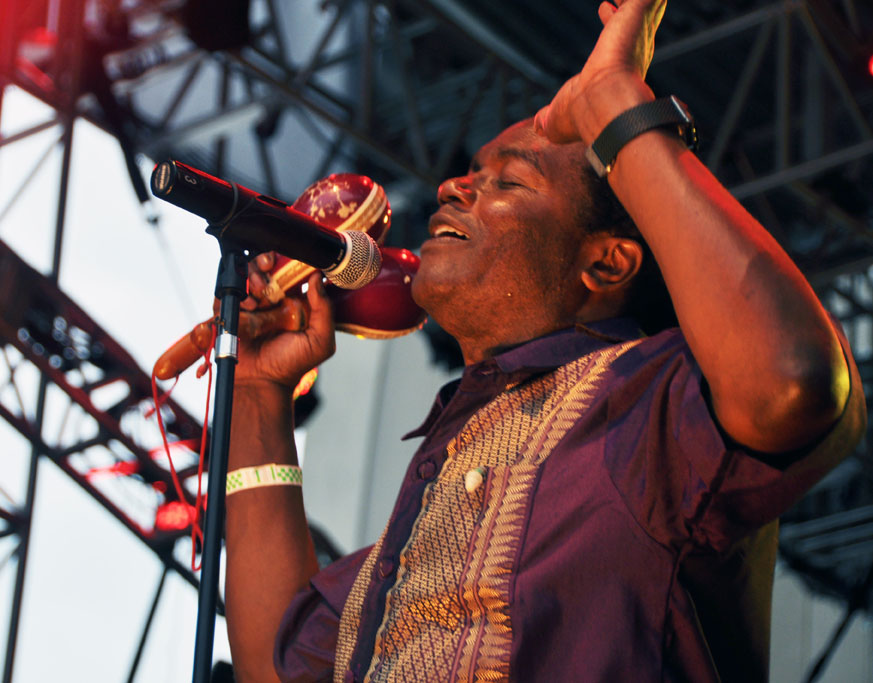 It’s not a fluke there is a fantastic salsa classic track about “Un Verano en Nueva York.” The Big Apple is an ideal place to enjoy various outdoor events, such as the Puerto Rican Day Parade and the July 4th/Independence Day Fireworks– both mentioned in the well-known hit by El Gran Combo de Puerto Rico.

But the “city that never sleeps” always has a lot more going on, such as Lincoln Center’s “Out of Doors” and “Midsummer Night Swing,” which on June 25 featured salsa (and more) from respected world music artist, Ricardo Lemvo and Makina Loca.

Raised in The Democratic Republic of the Congo with Angolan family roots, Lemvo came to the US in the 1980s to pursue a law degree and ended up devoting his life to music. The law world’s loss is our gain, as his absolutely-for-dancing music has earned him fame not only in North America and Europe, but also in Angola, Colombia, Senegal, and many other countries.

Lemvo took to the outdoor stage at Damrosch Park (right outside of Lincoln Center) and instantly got the salseros going. He performed many songs off of his new record, La Rumba Soy Yo, a multinational undertaking that was recorded in three continents and four countries (United States, Canada, France, Angola). Though there was much salsa (Lemvo is well-known for his offerings in the genre), he also belted out several songs which clearly draw from his Angolan roots. Three of the songs on his new record were written in collaboration with Angolan artists (Calo Pascoal, Kyaku Kyadaff, Adao Filipe) and the styles featured include Cuban and African rumba and soukous, Angolan kizomba and semba and Cuban son and salsa. Just like the album, Lemvo’s performance was upbeat and international, with professional dancing heels-clad women going from salsa spins to soukous hip shakes and wines. It even rained a bit, which as humid as it was that evening, seemed completely welcome.

Lincoln Center’s Out of Doors has lots more in store this summer, including Globalfest New York, featuring like M.A.K.U. Soundsystem on July 27. For those who are drawn to a formal dancefloor, the Midsummer Night Swing series continues on July 9, with the U.S. debut of Cuban soneros, Conjunto Chappottín y Sus Estrellas, and on July 11, with Brazilian samba outfit, Casuarina.