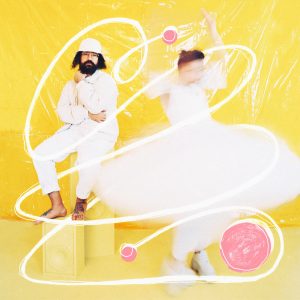 If you loved their recent single “How Beautiful She Is”, then you will be as excited as I am to let Brooklyn-based Colombian duo Salt Cathedral’s electro vibes and sky high vocals add even more joy to your early summer days. Hypnotic, fresh but also slightly wispy, Salt Cathedral mix both electronic and live elements in their songs, creating a space in which to play around with sounds and influences to recreate and regenerate danceable sounds. Carisma is a project that passes on celestial good vibes by the bucketload.

Opening with “a lifetime with you”, you are at once lulled back into the vocal loops that singer Juliana Ronderos is famed for: super pretty and easy listening at the same time. Track “Rudeboy” could be something of a shout out to another Caribbean neighbour who is on a similar sonic musical path. “muévelo”, one of the album’s standouts, could be a nod to Latin reggae pioneer El General’s similarly titled hit—it’s a track brimming with champeta flavour, offering a brief trip back to Colombia, where both members of the group hail from. Nicolas Losada’s backing vocals and his work producing the album really stand out on this track, and it sets the scene for the rest of the album: this is music to dance to!

Let’s not forget “How Beautiful She is”, inspired by “The Girl from Ipanema”, a track that turns everything that society drills into us about beauty on its head. Think attitude-laden lyrics, an insistent baile funk bass line and two unique guests; MC Bin Laden from São Paolo and local NY artist duendita from Queens, to back a truly global punch.

Salt Cathedral’s fluttery and enchanting vocals over soca, reggaeton and dancehall inspired Caribbean sounds shouldn’t work, but it does. As unique as this duo, and so easy to listen to, you will have it on repeat for days. A blast of positivity that remains both fresh and funky, giving an injection of unique Colombian sounds that will quite literally get you up on your feet to forget your worries.