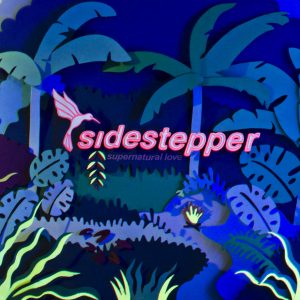 The new Sidestepper album, the sixth of their twenty-year history, is also their most significant. Not simply because Supernatural Love comes after seven long years of silence and even ten years after their last work of original material, but because it represents a decisive and mature turn in their career, which will easily help the British/Colombian electro-cumbia collective to spread its name and sound around the world.

The band, who substantially disappeared after the release of their remixes album The Buena Vibra Sound System in 2008, are finally back on track with all their groovy energy and tropical feelings. They found a new label, began and brought to success a crowdfunding campaign and finally have their new album released.

Supernatural Love shows a strong commitment to the Colombian and Caribbean origins of the band. Since the release of the single “Come See Us Play”, it was clear that the musicians intended to reclaim the most organic and endemic characters of their culture. Supernatural Love is a full-on dive into Colombian tradition. It recovers the Caribbean and Afro roots of Colombian music, but also develops folkloric aspects of the Latin American country.

Rather than supernatural, the album sounds earthly, pesticide-free and undomesticated: it is pure, joyful and wild at the same time. From the first track on the record, “Fuego Que Te Llama”, and on the aforementioned “Come See Us Play”, Sidestepper give the impression that they are playing inherited or tribal tunes. There’s something ancestral in the percussions pounded by El Chongo, Batatica and Mauri Rodriguez in “Lover” and “La Flor y la Voz”. The effect is magnified by the sensitivity of Eka Muñoz’s voice, which put the listeners’ ears and perceptions at ease. Then finally, this feeling can be explained by the warm harmonies of the choral sections (as on “Hear the Rain Come”) and the engaging call-and-response of “On The Line” and “Mangangué”, work that is constantly revealing a tuneful attitude.

These features are arguably the leitmotif that helps Supernatural Love to look and sound complete: throughout the eleven tracks on the album, you can always an uninterrupted feeling, which accompanies you back in time to revisit the origins of Colombian music expressions.

Bandleader Richard Blair is quite clear on this matter: “the inspiration for the sound of “Come See Us Play” (and the new album) comes from a desire to create an organic sound that goes back to the traditions of the incredible dance bands – the great ‘orquestas’ from Colombia, Haiti, Trinidad, Cuba and Africa – that existed before the electronic revolution in the 80s and 90s”.

The essential nature of the album is ultimately embodied by its lyrics. Supernatural Love is characterised by important but elementary images and icons: the four elements, the seasons, joie de vivre and Caribbean lust for life. The songs narrate simple social happenings, love stories, inspiring tales and encouraging calls, which induce and reinforce a community spirit and sense of sharing common values and emotions.

The more we listen to Supernatural Love, the more we realise how much we’re missing Sidestepper and their positive vibe. Finally they’re back in all their splendour and hopefully their tour will soon jump off too… all you have to do is ‘go see them play!’

Supernatural Love is available from Amazon UK and Amazon US