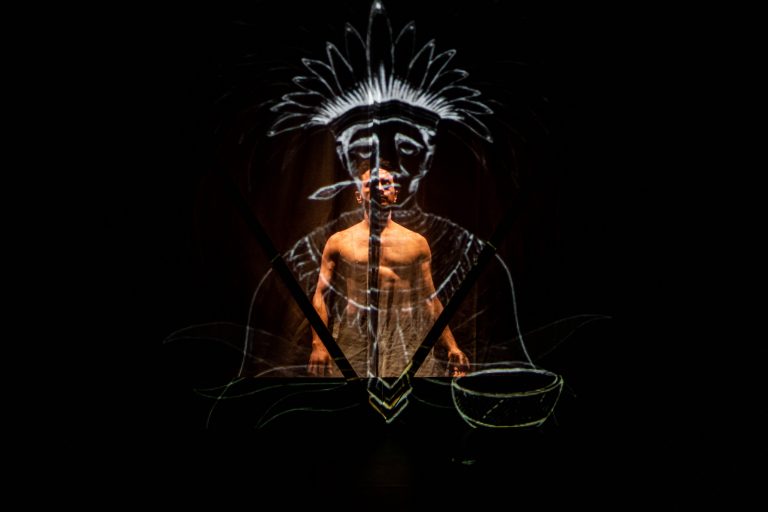 I caught up with Miguel Hernando Torres Umba over the phone, on the day Roundhouse, along with most theatres and venues, closed its doors to prevent the spread of coronavirus. Yet Miguel, originator and actor in the award-winning Stardust, is still positive. This has always been the case, reflected in his willingness to innovate, evolve and mould Stardust for its audience, making the show the bright spark that it is.

“It’s all about audience participation”, Miguel tells me, “about you coming and finding yourself in the show.” Originally a short physical and metaphorical treatment of the stigma that envelops Colombians because of the cocaine trade, Stardust has matured into a dynamic conversation around coca, cocaine, crime and identity.

At the show’s conception, Miguel, writer Dan and director Alex, knew what they wanted to say. They wanted to discuss the significance of coca in indigenous communities, trace the history of cocaine and its impact through the war on drugs – and tell it from the point of view of someone who has suffered first-hand. But they found it difficult to find their protagonist — “So I was me”, Miguel explains.

Miguel greets the audience of each show personally, at the moment they enter the theatre, inviting them into the conversation and beginning to solicit emotional empathy. “It’s all about keeping it in the room,” he explains. This is where the nerves kick in, as you realise that you too, the audience member, are part of this dynamic play, responsible for its course. The play moves along with audience members choosing number cards that Miguel hands around, each corresponding to a box on the stage containing narrative props to prompt the direction of the discussion. “It’s a device to make sure we travel through the show,” Miguel lays out, “it gives ‘Miguel the character’ a journey.”

One box leads you to the Amazon, for a theatrical reflection on the importance of coca for indigenous communities there. Miguel tells me that this section was informed by a friend who works closely with Amazonian communities and the Jaguar shamans of Yuruparí, whose knowledge is listed as an Intangible Cultural Heritage of Humanity by UNESCO. “He helped us with the explanation of preparing the Mambé,” Miguel tells me, a sacred superfood and medicine made from coca powder.

Simple, perhaps verging on cliched, animations of jungle scenes are projected onto the set to a soundtrack of calming and atmospheric guitar and Miguel mimes a Mambe ritual. Although inspired by the shamans, this part of the show is very much an interpretation, it is not literal. “Caz, the sound designer, interpreted the sounds of the Amazon in her own composition,” Miguel recounts, “This is our own journey; we are not an indigenous community and this story does not belong to us, we are interpreting it and passing it on to you.”

A thrillingly dynamic part of the show has you hurtling through the history of cocaine and living through an all-night coke bender. Miguel’s movement and expressions are exquisite. Especially considering Miguel has never taken cocaine. Yep, I’ll say it again, Miguel has never taken cocaine. “A, because I’m scared of it. I’m already quite a hyper person! And B, I don’t think you have to have experienced something in order to portray it. We describe the chemical reactions of the drug on your brain and how that generally makes people feel. I interpret this, going through it in a physical way – drawing on my experience of knowing how it is to feel good, how it is to feel down – whether that’s from alcohol or just from myself. It’s real emotions, just massively augmented.”

Miguel’s background is in corporeal mime, having studied at the Theatre De L’Ange Fou International School Of Corporeal Mime in London. “This show combines a bit of everything. Originally we were going to use three actors, but we instead settled on a very layered performance with one actor – there is music, animation, a game show, dance, movement.” Although Miguel originally moved to the UK at 20 to study a year of English, he got onto a physical theatre course, decided to stay and got hooked into working with Mandingo Arts, Secret Cinema, and in various carnival arts.

The end is completely physical, with a poetic, epic moment of Miguel trying to clean his skin of the stigma of crime and cocaine associated with Colombia. This emotive reflection on identity was in fact the germ of the whole piece. Miguel grew up with the effects of cocaine all around him – lots of people in his neighbourhood ended up in gang violence, but he was taken by the arts. “You’d see it in the news – all the different cartels, bombs. You just have to ignore it and carry on, a survival technique I guess. You don’t question it. It’s really when you come out of the country that it hits you. Straight away, actually, as soon as you’re in the airport being questioned because you’re Colombian.”

Friends, families and organisations have helped to organically cultivate the show to its current state. The Stardust team have collected anecdotes and stories as well as deeply researching the history of the cocaine trade. I ask how the feeling of the show has evolved. “The point of view is more balanced now, there is less anger and blame,” Miguel reveals. Of course, consumption plays a huge role in the cocaine trade and London is rather fond of the drug. Nevertheless, Miguel went on to explain, “after performing the show to various Colombian organisations, we started to understand that this project is not about pointing fingers.”

In its current form, Stardust does not draw conclusions, place blame or tell anyone how to live. Miguel plays a shaman, a criminal game show host, a casual consumer, and a stigmatised Colombian. There is palpable anger and frustration, but ultimately Miguel the character (and, I imagine, the actor) gets tired of his anger throughout the course of the play. “We wanted for people unaffected by cocaine to build an emotional connection with me on the stage that they are left with when they leave the theatre, so people can learn without having to go through traumatic experiences themselves,” he illustrates.

Thanks to the conversations engendered by the show, they’ve held post-show discussions in the Roundhoue theatre with drugs policy-makers and organisations such as Rodeemos el Diálogo (Embrace the Dialogue, who work on implementing the Peace Process). The show informs people about the crisis in Colombia and the discussions in turn inform the show. “There’s a need for the show to go beyond just what we want to say. Opening the conversation is also a call to action,” Miguel points out.

Miguel explains that the show is also about acceptance, “There are now more illegal crops in Colombia than ever before. We have to accept this about Colombia. The first step of any sort of issue is to look at it and accept first that it’s there – you didn’t choose it, but it’s there. It’s been interesting for me to say things like ‘It is our problem’. I can’t wash it off my hands that easily.” Miguel is aware that many people in Colombia haven’t been through this process of acceptance — more difficult when you’re living these issues daily. The team intends to take the show to Colombia (as well as performing a Spanish-language version in London) to continue this urgent conversation in a different context. “It would begin with me talking about my experience outside of Colombia. It would start at the inverse point,” Miguel reveals. “The indigenous community’s experience would be enlightening for Colombians, too – many people in Colombia don’t know about this.”

In addition to Stardust, Miguel is the creative director for one of the next Secret Cinema shows this year, (“obviously I can’t tell you about it because it’s a secret”) and he’ll be working with Gecko physical theatre company as a performer.

Stardust was performed at the Roundhouse in March 2020.