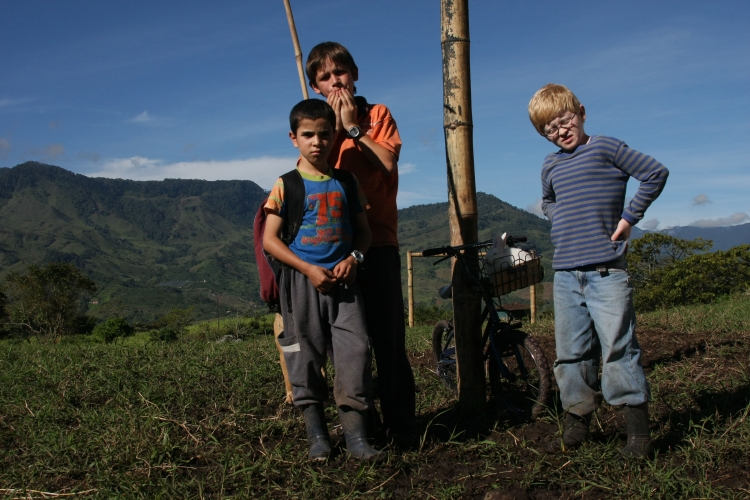 The Colours of the Mountain

A mountain village caught in the crossfire between guerillas and paramilitary groups in Colombia is the subject of The Colours of the Mountain (Spanish: Los Colores De La Montaña | Carlos César Arbeláez, 2010), a beautifully evocative and convincing film that looks at the way violence threatens a peaceful rural community through the eyes of 9-year old Manuel and his band of schoolmates.

When he’s not helping his father milk the family cow or tending to the other chores on the farm, Manuel’s loves nothing more than to play football with his classmates including best friend Julian, and albino pal Poca Luz. With the brand new ball he receives for his birthday, his happiness knows no bounds, until one of his friends kicks the ball into a nearby field that turns out to be mined. Luckily the only one hurt is a runaway cow but it is enough for the adults of the village, including Carmen, their new schoolteacher, to declare the football pitch off limits, leaving Manuel’s precious ball stranded.

But the minefield is just one of the increasing reminders of the threatening forces around them: Manuel’s father Ernesto, attempts to avoid the men that come to the house and insist that he attend their meetings, knowing that just to show up will imply his involvement with the guerillas; the family learn about the execution of the brothers Gonzalez, killed by the paramilitaries on suspicion of collaborating with the guerilla forces and, little by little, Manuel sees the number of other children in his class dwindle as more and more families abandon the village. But despite the concerns about to their safety, Ernesto refuses to uproot his family, and Manuel, in the same stubborn spirit as his father, ignores the warnings of the grown-ups and persuades Julian and Poca Luz to help him retrieve his lost ball.

The children’s attempts to recover the football form the centre of The Colours of the Mountain, and the main scenes in the film revolve around the relationships and bonds between them. Time and again their interactions are juxtaposed against the more serious conversations between the adults so that the underlying conflict becomes almost a backdrop. While the personalities of the children make them engaging to watch, as others have noted, they are almost too likeable for us ever to believe they will ever come to any harm in the minefield. Their various strategies for recovering the lost ball therefore lack a strong dramatic impact and the fact that most of the other action is seen through Manuel’s viewpoint, with crucial events mainly off camera, means that the real threat hanging over their remains somewhat understated throughout.

What comes through from these scenes is Manuel’s (in an extraordinarily vivid performance from Hernán Mauricio Ocampo) determination and spirit, which is even more poignant when compared to the majority of adults around him who seem almost passive in the face of their fate. The only sign of adult will and self-determination comes from Carmen, the schoolteacher. Taking the wall of the schoolhouse – which has been used as a canvas to display the slogans of the various fighting factions – she encourages the children to paint over the black lettering and create a colourful mural, and in so doing, she ignores the warnings from one of the other village women who is afraid the gesture will be misinterpreted. But Carmen is adamant, for, as she tells the children: the school is theirs and as such should be respected.

Yet this solitary act of defiance is one of the few uplifting moments in what seems an almost inevitable outcome. When the climax finally comes, there is little surprise. While the lack of dramatic tension might seem a weakness, and the symbolism of Manuel´s determination to regain his lost ball almost too easy a metaphor, the emphasis on the children’s viewpoint gives The Colours of the Mountain an emotional impact that comes from a deep sense of nostalgia. The gestures and jokes between the boys, the games of football amidst the lush scenery, the daily interactions with dogs, rabbits, cows and their other animals, the brightly painted mural on the school wall and the colours of the mountain Manuel tries to capture in his scrapbook, all these lingering images take on an additional force with an understanding of the film’s context.

In 2009 Amnesty International denounced what it said was a dramatic rise in the number of Colombia’s internally displaced population, which is considered one of the largest in the world, with an estimated 3 to 4 million people having been forced to abandon their homes as a result of the armed conflict. The Colours of the Mountain is a film that attempts to offer a glimpse of the plight of the civilian population in Colombia – in this case that of the campesinos, or farmers – caught amidst decades of civil war. As Amnesty International’s Americas Deputy Director Marcelo Pollack said: “The dire humanitarian situation in Colombia is one of today’s most hidden tragedies, and belies claims by the Colombian government that the country has overcome its troubled past.”

The Colours of the Mountain doesn’t aspire to high drama or heroics but tells a simple story from the eyes of the children who lived through it. The film’s message is perhaps made most explicit in a scene between the two friends when Julian shows Manuel his collection of bullets. As Julian holds up each of the bullets in turn and asks his pal to guess their name and their use, the boys’ bodies are in shadow and are silhouetted against the light of the gorgeous green mountain behind them. There is an innocence and intimacy between the two friends in this secret shared, but at the same time an unwitting sadness (underscored by the music playing throughout) of a loss that will only be revealed with hindsight.

The Colours of the Mountain will be screening as part of the Colombian Film Panorama taking place in London, Paris and Barcelona in June 2014. More details at colombianfilmpanorama.tumblr.com