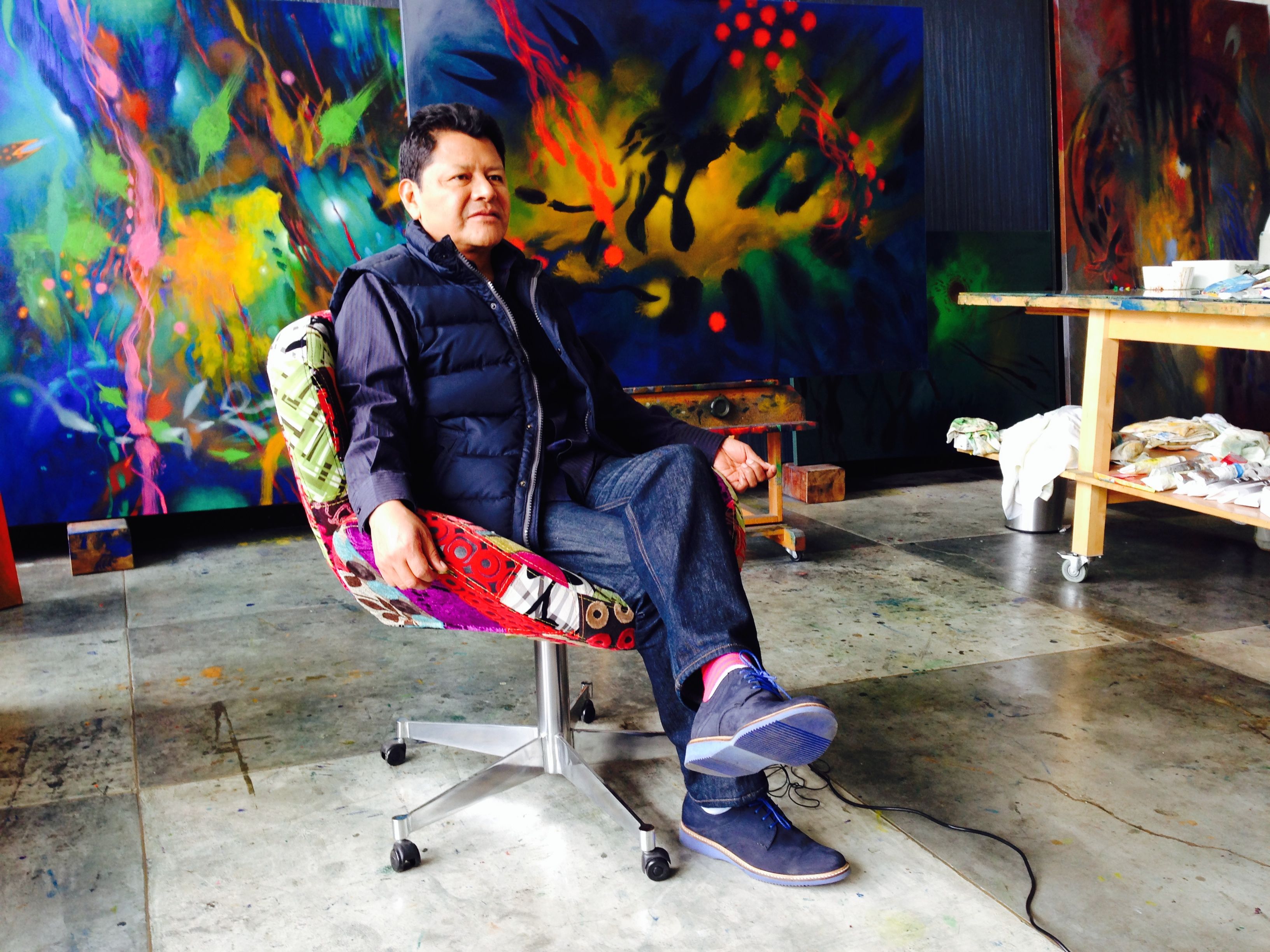 The Son Of A Shaman: An Interview With Carlos Jacanamijoy

When I realized that I’d picked a bad café to interview the ‘ maestro’ of Colombian art (it was far too noisy), and that we’d have to relocate my heart sank, but as soon as Carlos Jacanamijoy appeared, his warmth, his calm and his open demeanour made the fact that we’d have to sit in a Starbucks irrelevant. Jacanamijoy hails from Putomayo, a remote town in the Colombian Andes where he grew up as part of the Quechua-speaking Inga tribe, and this upbringing has greatly informed his paintings and sculpture. Educated in a Western academic environment, his cultural hybridity gives him access to two completely different world perspectives which have sparked a great interest in the contrasts and hierarchies within society, and a real depth of understanding about how humans relate to each other. Carlos is exhibiting his Recent Works in the Sandra Higgins Fine Art Gallery in Chelsea, London from 4th December – 16th January, where he is also presenting his self-produced documentary Jacanamijoy: A Reflection On Racism.

S&C: So Carlos, what do you think of London?

Jacanamijoy: Well I’ve been to London some other times, but I’m feeling really good here and looking forward to the exhibition and the documentary screening. I think this time I feel at home, it´s different to come with my own exhibition and my own things to do.

S&C: What motivates you to paint?

Jacanamijoy: My whole life has been about painting. I discovered it as a child but I didn´t know it was going to be a lifelong experience. Now that I’ve done research and made it my profession I’ve realized that painting can become a force of social transformation. It is fantastic to be able to make a living from this. It’s very difficult, especially in countries like Colombia to have an artistic career. When I began to paint I drew from the vision that culture has of the world, the world that the Ingas see, and the world of my ancestors. That world has been cut out of history. S&C: What role do you think art can play in society?

Jacanamijoy: The word art in itself has been constructed by Western society, and so in other belief systems this concept of art doesn’t exist. Although I do think that in our times art has different borders, almost everyone is an artist and this has a lot to do with the Inga concept of art. It is like dreaming, like playing, just living. In the Amerindian cultures everything is just part of life.

S&C: How is your art related to the concept of shamanism?

Jacanamijoy: Well, to understand my work I have always had to draw aspects from two cultures; my culture and Western culture. Shamanism seen from a Western point of view is very exotic, until recently it was only seen as a belief. Science has opened doors for us in that respect, allowed us to see it with fresh eyes. I find it so interesting that nowadays the Western world is looking at other cultures, which have brought beautiful things to the world, in a totally different way. I was the son of a shaman, so I grew up in that world and as a child I always had this close contact with my family and with that world. The artist is a kind of shaman, and this merges with the Western belief, which thinks of the artist as a spear point that forges ahead breaking down barriers and opening up new paths. I have the other experience of my culture, that has been so undervalued and silenced, but it is wonderful that the two worlds can share, just like how I am talking to you now, it’s something so beautiful.

S&C: What impact has your family and your upbringing had on your art?

Jacanamijoy: In Colombia I came from Putomayo, which is so far away in the Andes and in the forest. People always think that those who live far from the cities are backwards, but now humanity is finding more importance in things close to the earth, when before it was embarrassing to be from these places. To understand culture is also to understand the vegetation and the organic matter we are made of, how this coffee is made for example, why it tastes like this, what kind of nutrition it brings to us, what name our ancestors used for it. I saw something about Jamie Oliver, saying that he took vegetables to a nursery school and when he asked ‘what is this?’ nobody knew, for me that is incredible. My culture is much related to the organic, the vegetation. My grandmother spent all day with her hands covered in soil, which to me is beautiful. I grew up without factory toys, the sculpture Chilukuan is a papayuela, a small papaya. We used to put sticks in them, just like in the sculpture and play with them making them go round and round like little animals.

S&C: Could you define your art? Does it identify with the rest of Colombian art?

Jacanamijoy: My art is contemporary, it’s a meeting of two worlds. The concept and the technique are very Western, but the concepts are from Colombia. There aren’t many traditional artists who have dedicated themselves to their work. It’s not very common that indigenous Americans dedicate themselves to art. There was not this way of looking at studying degrees related to art. The Western world has always stereotyped the indigenous people. They have always been seen as pre-modern, illiterate, archaic, underestimated, there’s this whole concept of primitivism. It’s a shame that the whole world carries and feels, I say that with all the love in the world, and this also really relates to the documentary that I’m presenting. Now we are looking at these cultures that have brought so much knowledge about the planet, and about life into our world.

S&C: So what is next after London?

Jacanamijoy: I’ve been invited to Ibiza, I’m going to see the space because I’d like to do something special. With that meeting of cultures, with a different perspective. I really think that it’s terrible how we see ourselves.

Jacanamijoy: I mean socially, in the everyday, we undervalue everything that is ordinary. In theory we love each other and everything is beautiful, but at borders and within governments we are scared of our neighbours, we are scared of seeing each other. I think we can see each other physically in the same way that we see art, there is so much respect for our art in Colombia. Art can make us change our perspective, it allows us to see our culture in its reality not as an abstraction, as human beings. I want to do something related to this in Ibiza. We should see ourselves as brothers but we look at each other like aliens. Many people do not exist for others, my grandmother for example never even went to Bogotá but she lived happily, she died happily.

To find out more about Carlos Jacanamijoy’s exhibition and film screening in London please visit sandrahiggins.com/future-exhibitions.php

Sandra Higgins, owner and director of the gallery, and Lorena Cervera are producing a documentary about Jacanamijoy’s life, and are currently raising money on Kickstarter to complete it. If you’d like to get involved please visit: kickstarter.com/projects/1856877777/alchemy-in-art-the-voice-of-jacanamijoy.