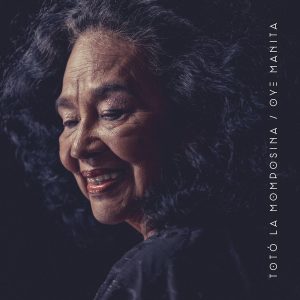 Oye Manita is a glance at post-colonial musical resistance courtesy of Colombia’s legendary singer Totó La Momposina. Her voice is the leading instrument, the brush on Oye Manita‘s canvas; its hearty colors are the instruments that follow, providing light and dark tones, with its rhythms and percussion colluding in a feeling of warm nostalgia. It’s an album that brings together the adventurous work that Totó undertook in 1980s France.

The sandy percussion, and palm beat rebounding off conga-like drums, brings a ritual feel to the album’s ancestral songs. Totó’s timbre is homelike and welcoming. The choir strikes right after her preaching trill, as if answering the queen of cumbia. The warm and balmy colors emulate a joyful angst. Songs like the title track express such a feeling both lyrically and instrumentally. The strings of the cuatro, beside the acoustic guitar, bring the image of Totó telling the story of the beautiful residents of a long forgotten Chambacú, a devastated hovel outside of Cartagena’s mythical mural city.

“Rosa” brings out counter-statement richness. As the lyrics praise the much-loved flower, the instruments bring out the darker tones mentioned earlier. Congas and shakers synchronize and bring out a dimly lit adoration for the flower. Giving the full controversy that such a flower deserves, for the lovers and the heartbroken. “El Porro Magangueleño” offers a more indigenous approach. The panpipes give an Andean feel to the music, but the magic behind this piece is the singing. Totó eases through the woody blow of the indigenous instrument and exposes a glance at local Magangué anecdotes.

Half way through the album, “Garabatos” is the upbeat ode expected from the palm beat percussion. Sung as a mild reproach from a romantic quarrel, Totó sings full of pride and emancipation from a selfish lover. Further on, “Mojana” dives into a bleak spiritual opening. The slight reverb on Totó’s voice counterpoints with percussion that heads straight into the depths of complicated consent. This consent can be better understood as a sense of forgiveness once the following track, “Mojana lo Enamoro”, unfolds with the congas and acoustic picking of the stringed instruments.

To better understand our ancestors has become a mission for artistic youth. Most of which try to reinterpret ancestral sounds and rhythms with an ounce of synthesizers and faster beats here and there. New wave cumbia wouldn’t be at the pinnacle it’s at now had it not been for artists such as Totó who thrived throughout the 20th Century to preserve the mythical ancestral rhythms of the past. Oye Manita is not a glance at Totó but at her mission. A mission that thrives to keep Andean roots in the midst of musical narrative and provide the lyrical truths of both cumbia and porro.

Oye Manita is available from Bandcamp.