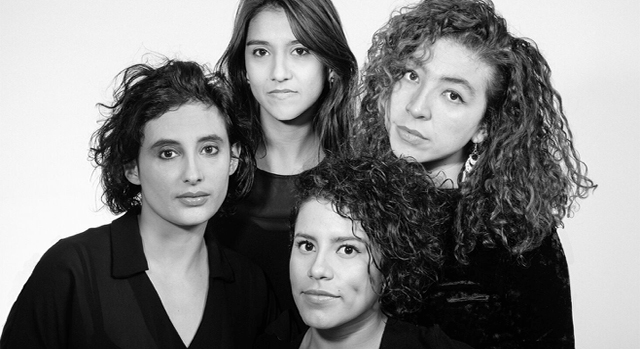 LADAMA is touring in promotion of its first full length album, LADAMA, after the release of its successful single, “Porro Maracatu”, in August.

The ladies of LADAMA hail from different countries—Brazil, Colombia, U.S., and Venezuela—bringing with them a unique contribution to the quartet’s eclectic sound. Bandola llanera fuses with tambor alegre, zabumba, R&B, and soul; traditional South American music is layered with electronic arrangements for pop music reinvented.

Each musician acclaimed in their own country, LADAMA’s collective mission has been to defy norms and boundaries. Having met initially through OneBeat, a prestigious international music exchange program, the all-female quartet has disrupted historically male-dominated music spaces and challenged narrow perceptions of Latin American music with their acoustic-electric blends. Their music is deeply inspired and informed by the contexts of their home countries, which they stay connected to through giving music workshops in their respective homelands. This dynamism has not gone unnoticed; LADAMA climbed to the Top 5 of NACC Radio Charts in less than two months.

The album could not be a more appropriate rebuke to a societal context that is increasingly focused on maintaining borders—national, political, linguistic and otherwise. One listen to LADAMA provokes the audience to recall that these boundaries only exist to be broken.

Next up, LADAMA will be stopping in Charlottesville, VA; Marlboro, N.Y.; and Millheim, Penn. They’ll play New York City in the early spring. Tickets and tour dates here.

Stream their self-titled album on Spotify below: