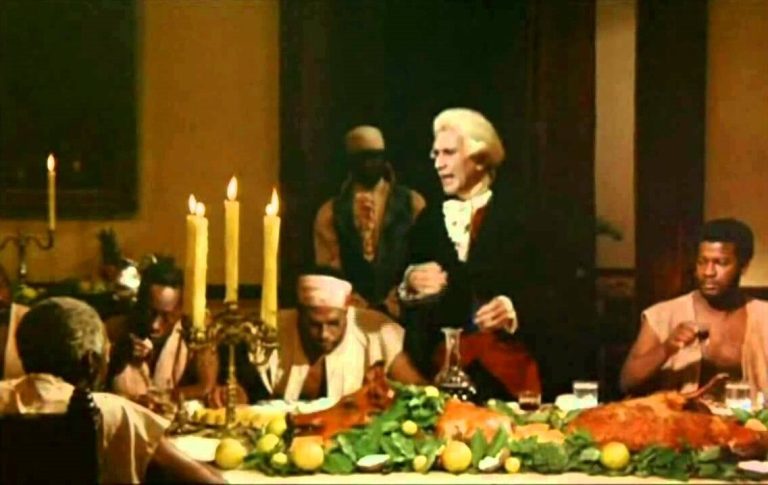 Cinema Restored: ‘The Last Supper’ at the Barbican

As part of the Barbican’s bi-monthly film strand in restoration of global art cinema, Tomás Gutiérrez Alea‘s Cuban classic ‘The Last Supper’ (La últimar cena) will be shown in a rare screening. The 1976 film has proven to hold notoriety within Cuban film history, fusing the element of absurd into its satirical storytelling. The film centres around a sugar plantation in 18th century Cuba, its Count recreates the Biblical Last Supper with twelve of the plantations slaves and naturally himself in the position of Jesus Christ. What follows is a deranged, pious speech with the hopes of enlightening his slaves, but in fact spurring an epic rebellion.

In the spirit of Holy Week, the Count decides to host his version of The Last Supper on Maundy Thursday. With his designated disciples sat beside him, the Count begins his descent into wine-fuelled preaching. The table is filled with a feast; closeups reveal meat, grapes, wine glasses filled to the top in a grotesque display of decadence. Borne from a desire not to feel guilty about his role as a plantation owner, the Count’s theatrical speech and conversations dart between Christian teachings, mythology and justifications for owning slaves. Lasting almost an hour, the scene feels chaotic and experimental, revealing more of the film’s satirical commentary on the Catholic Church and colonialism that seep into Cuba’s modern-day history. What follows over the course of the days of the Holy Week is chaos through a slave rebellion, revealing an interesting ending the Count inflicts upon himself.

The film’s director, Tomás Gutiérrez Alea is regarded as one of the greats within the Cuban cinema, praised for his complex portrayals of Cuba through his filmography. Shortly after the Cuban revolution Alea co-founded the national revolutionary institute ICAIC (Instituto Cubano del Arte e Industria Cinematográficos) spurring the production of a diverse range of documentaries, shorts and feature films where his creativity formed. Alea’s directing style is highly influenced by Italian Neo-Realism after his studies in Italy, the movement’s focus on the poor and working classes fitting perfectly into his critiques of the socioeconomic and political realities of post-revolutionary Cuba. This emergence of genre in offered a new cultural perspective to the limited Cuban film market operating within the Communist regime. ‘The Last Supper’ uses allegory within its biting satire, whilst also infusing the surreal and absurd through its comedic nods to Luis Buñuel.

The screening at the Barbican will include an introduction by documentary filmmaker and scholar Michael Chanan, an expert in Cuban cinema. Sounds and Colours are delighted to attend this screening, which is set to be an exciting and informative evening celebrating this moment of Cuban cinematic history.

Join us at the Barbican at 6.30pm, tickets available here.