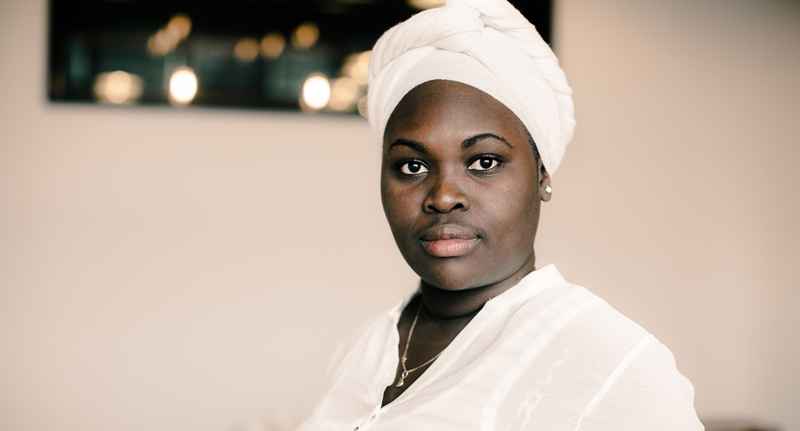 Jazz, Nueva Era and Spirituality: An Interview with Daymé Arocena

There is a strong feeling of spirituality attached to the music of Daymé Arocena. Even with her all-white clothing style, she emphasizes faith and purity in her music, which she describes as finding a place between peacefulness and a storm. After gaining international attention thanks to the Havana Cultura EP which showcased her talents, Daymé speaks with Sounds and Colours about her new jazz-inspired album Nueva Era and her experiences in the industry since a very young age.

You started singing semi professionally at the age of eight! How did that begin?
I started to sing at neighbourhood parties when I was around four and my parents noticed that I had a talent for music. So they gave me private teachers at eight and by the time I was 10 I was at the Alejandro Garcia Caturla School of Music. I also sang in a community choir, D’senitos, and was a principal soloist. I graduated in 2011 from the Amadeo Roldan Conservatory having specialised in Choir Direction. Yes, I studied classical music for nine years!

Your voice is so beautiful and I can see that your music has some influence of jazz. What other type of styles or artists have inspired your music?
I’m Cuban and my ‘Cubanness’ feeds on all the influences which have been left by all those who have stayed on the island, called by various people ‘the Key to the Gulf’, during its formation. I couldn’t define how many things are within it. Sometimes people say they expect to hear something more ‘Cuban’ when they talk about me but in all honesty my music is 100% creole because it has influences from everywhere. Besides I’m a very observant person and pay attention to all genres and singers even if at times they’re not of the highest quality, because sometimes the person you expect the least from is the one you learn great lessons from. So my music has a flavour of everything!

I also note some heavy Afro-Cuban influences in your music. How are you intersecting these influences with others, such as jazz?
…because nothing is absolute and each thing comes from another. Jazz as a genre also has its foundations in Africa and slavery. There aren’t enough words to define how intermingled they are. I could explain all the most complicated musical terms possible, but in the end the conclusion is the same: music isn’t cubic but spherical.

Tell us a bit more about Nueva Era. How did this project begin and what is the one thing you want your audience to walk away with?
Nueva Era is the conclusion of something unexpected, and the beginning of a new stage in my life. Nothing planned, everything natural. Nueva Era is a spontaneous album and enjoys the combined good energies of a lot of creative people. In the studio we were all perfect strangers united by just one language: music. I know that people are going to feel it like this: it’s like when you’re invited to try something that you’re not familiar with and when you do, you feel right at home because you feel identified with it. That’s this project: the love child of music and the desire to create.

Any advice for any young Cuban or Latina singers out there trying to pursue their career?
…SING!!! Sing without fear, everywhere and at all times! Sing when nobody believes in you, when they don’t approve, when they ignore you. Sing all the time…so even if you don’t reach your goal, at least you’ll get better every day.

What is the future for Dayme? Any future collaborations we should be on the lookout for?
The future is the present that we build today. MUSIC!

So if you’re looking for positive and uplifting energy, check out Dayme’s beautiful work, Nueva Era.

Nueva Era is released by Brownswood Recordings and available from Amazon UK, Amazon US and iTunes