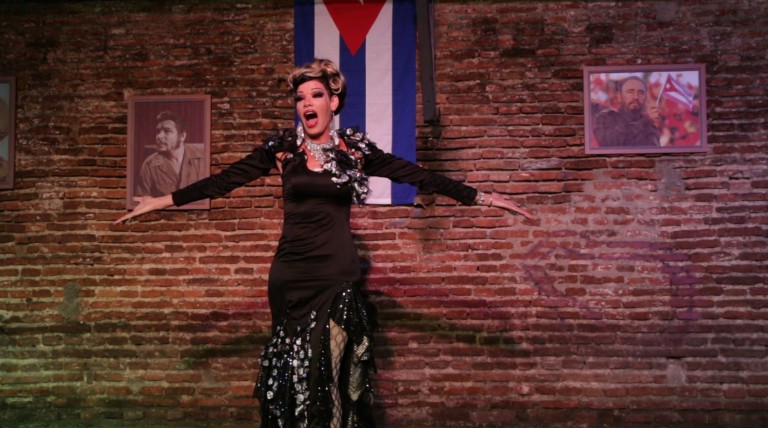 Directed by Nicolás Muñoz, Juntos y Revueltos offers an insight into El Mejunje de Silverio, a cultural centre located in Santa Clara, Cuba. El Mejunje is a unique place which hosts a variety of shows, concerts, performances and activities. However, its distinctive characteristic is its support towards the marginalised groups, and especially, the LGBTQ community. “Its aim is altruistic love towards society, towards society’s outcasts, those in social ghettos.” People of different age, gender and sexual orientation ‘find refuge’ in this fascinating venue, which embraces and promotes equality and diversity.

The documentary is arranged through nine separate segments or “ingredients” as they are called, each of them focused on a different personal story. El Mejunje is the interface between them all – the link that connects nine different stories of love. “El Mejunje is like a human heart that opens up to everyone and never closes”, admits its founder Nelson Águila. “It’s a labour of love. There’s no room there for indifference.”

Juntos y Revueltos (with an English title of Side by Side, Eye to Eye) is both observational and participatory. It allows the audience to invade in on the ‘protagonists’ lives through uninterrupted dialogues and intimate scenes of their daily life. However, the camera makes its presence noticeable when the characters turn to it to narrate their personal stories. The narrations are often fused with shots of the Cuban landscape, which give the context of this radical project.

The documentary attempts to attach the vision and the character of El Mejunje to the Cuban revolution led by Fidel Castro and Che Guevara. This unusual cultural space is supported by the Cuban government and is part of the constant revolution that goes on. Its habitués are followers of Castro and some of them are also members of the Communist Party. Εl Mejunje’s walls are decorated with the Cuban flag along with photographs of Che Guevara, Fidel Castro and Camilo Cienfuegos. The acceptance and the inclusion of marginalized and minority groups are seen as part of Fidel’s revolution.

The documentary illustrates the role and significance of this remarkable cultural centre that has brightened the lives of so many people. Nicolás Muñoz’s film offers an impressive example of a collective effort to fight discrimination and promote a fair and equal society.

The UK Premiere of Juntos y Revueltos is on Sunday 17th of April as part of the ¡Viva! Spanish & Latin American Festival 2016.