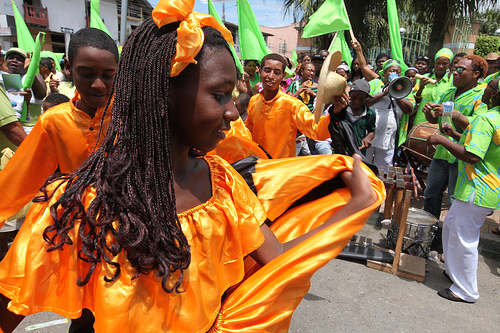 Esmeraldas and its Afro-Ecuadorian Cultural Legacy

The far-north coast of Ecuador has a historical and cultural background that sets it apart from most of the rest of the country, with cultural traditions whose roots stretch across the globe. In recent years, the Afro-Ecuadorian community who make up most of Esmeraldas have made significant progress in gaining their rights with a constitutional referendum in 1998 which accepted for the first time the status of Ecuador as a racially and culturally hybrid country. Nevertheless, racist attitudes persist and are not always, but very often ingrained in Ecuadorian social norms, especially away from the coastal areas. Esmeraldas, with a 70% Afro-Ecuadorian population, is the most Afro-Ecuadorian concentrated region, followed by the Valle del Chota and both Quito and Guayaquil. These groups have been historically discriminated against by other ethnic groups in all areas except sport, with Afro-Ecuadorians making up a large proportion of the national football team.

Esmeraldas takes its name from Spanish colonisers, who hoped to find a rich source of emeralds, but also for the lush tropical vegetation of the area. A mixture of historical archives and legends tell the tale of a slave ship wrecked along the Northern Pacific coast of Ecuador in 1533 which led to the establishment of an African diaspora settlement merged with indigenous groups from the Esmeraldas area. Runaway slaves from Brazil and surrounding settlements and plantations joined communities known as palenques, and together these groups held off the Spanish colonial powers for many years. The intense mixing and merging of cultures from different sides of the globe is evident in the music of the region today, as in many areas of the Americas where very culturally and ethnically different groups were pushed together under the violent and displacing pressure of the slave trade. Nevertheless African-descended cultural aspects are visible in the popular marimba and arrullos, along with Afro-Brazilian samba influences. This shows the active role played by Africans and their descendants in the cultural make-up of these areas even within the repressive slave trade.

The base of the music is made up of rhytmic drumming and the warm and distinctive marimba, a wooden xylophone, accompanied by singers and a traditional dance. In Esmeraldas and the Pacific Coast of Colombia a branch of the genre, marimba salsera, has more contemporary influences of the salsa culture popular in most parts of Ecuador and throughout Latin America. The esmeraldeños celebrate this cultural and musical legacy in various festivals and performances such as the Festival Internacional de Danza y Musica Afro, and music accompanies and is part of different religious practises. The increasing recognition given to the cultural and historical richness of the area may go some way to confronting the established racist attitudes, but due to the region’s relative economic, infrastructural and social isolation, significant change and equality for Afro-Ecuadorians is yet to materialise.

Watch a great short film about Afro-Ecuadorian music, called The Guardians Of The Marimba, The Cununo and The Guasa, below: