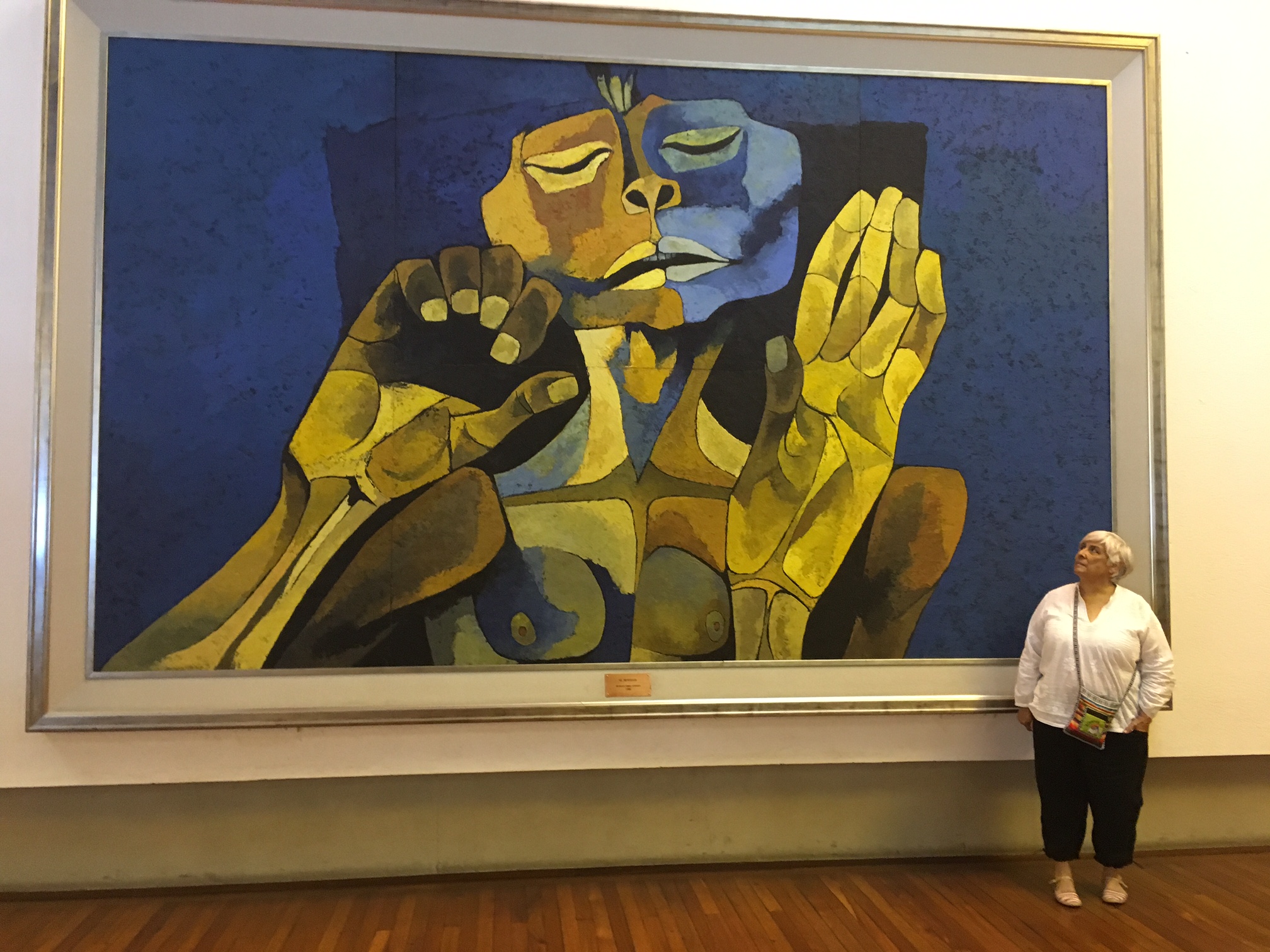 Enthusiasm and vivid memories seep across with joy from Chicana Artist Margaret Garcia as I sat in her colourful studio in Highland Park, California surrounded by textured paintings and portraits of friends hung on the walls. Her visit to Quito, Ecuador in May 2017 was an unexpected encounter. Garcia leans forward on her red wooden chair, stands up, and reaches over to a huge 400-page bright orange hardcover book no less than 5 pounds in weight. “Here, did you see the book?” “Wow! No I haven’t!”, I replied. “It seems to be half the weight of your luggage!” We laughed and I immediately began to page through this beautiful treasure. It was a gift from Berenice, the daughter of one of Latin America’s most internationally renowned artists, Oswaldo Guayasamín. The book, Guayasamín: El Hombre, La Obra, La Crítica, is an accumulation of over 60 years of images of his life, sculptures, paintings, watercolours, murals and jewellery. The magic of each page told a story. It is a testament to Guayasamín’s artistic voyage with love, hope, indignation, tenderness and rage across Latin America’s history and struggles; it reflects the universal spirit of an artist committed to humanity who denounced war and the pillaging of Las Americas.

Garcia was surprised she had never heard of Guayasamín. That would change after an arranged tour, led by Berenice, of Guayasamín’s studio, home, garden, private collection, and his lifelong project, “La Capilla del Hombre” (The Chapel Dedicated to Humanity).

Oswaldo Guayasamín was born in Ecuador on July 6, 1919. He was the eldest of ten children. His father was a native Quechua Indian and his mother a mestiza (mixed race). He and his siblings were raised in extreme poverty. His cultural and racial makeup would be the cause of much his experience with racism and discrimination. At an early age Guayasamín demonstrated a skill and attraction for drawing. This led him to enrol into the School of Fine Arts at the age of twelve. Guayasamín’s artistic development would be influenced by several artists: one of the most influential was his apprentice with Mexico’s grande (giant) muralist Jose Clemente Orozco. Picasso, his encounter with Oaxacan painter Rufino Tamayo in New York City in the 1940s, and exposure to other artists would all add to his artistic imagination.

The family-administered Guayasamín Foundation Museum holds one of the largest collections of Guayasamín’s artwork as well as an impressive collection of pre-hispanic ceramic works, clay figurines, sculptures and colonial art. The collection also consists of prints by Francisco de Goya and Pablo Picasso. Garcia realized after viewing the print collection Guayasamin’s dedication to bring other master artists to the people of Ecuador. But what most impressed Garcia was the respect that Ecuadorians felt towards him. She was face to face with the paintings of an artist in revolt, one who examined the soul and consciousness of society’s 20th century cruelty towards the poor and the marginalized, with two series “The Wretched of the Earth”, partially inspired by Frantz Fanon, and “The Age of Rage” (1952 -1993). For historian Carlos Lasso Cueva, “He was in constant revolt against a perverse social order of things”. The powerful images of cries, screams and struggle would shiver and move Garcia to tears that suspended on the rim of her eyelids. She took a slow and deep breath to regain balance as she continued her tour of the museum.

Guayasamín’s commitment to the social conditions of the Third World manifested on canvass were meant to make one uncomfortable. There was a selflessness about him that irritated the bourgeois and elite classes. He is often quoted as saying, “My painting is to hurt, to scratch and hit inside people’s hearts. To show what Man does against Man.”

Early in his career and throughout most of his lifetime he called attention to the injustices, oppression and inequalities. He raised political and ethical questions that steered towards peace. One of his last endeavors began in Quito, Ecuador in 1985 and completed in 2002 was the la Capilla del Hombre (Chapel of Humanity) dedicated not to ornate walls, but to speak of hope and be vigil for humanity’s future of well being. His son, Pablo Guayasamín, described his father’s motivation in the following manner, “There were these great monasteries, great churches, great cathedrals where they adored gods that may or may not exist. To virgins that we do not know if they existed or did not exist. Instead of these religious beliefs, why could we not see a chapel, a place of meditation, where we could put ourselves to analyze what are our roots? Where do we come from? What happened to us during the conquest? And how are we going into the 21st Century?”

The Chapel went beyond imitating and replicating conceptual western structures. It was built with pre-Hispanic, non-Western, and non-European architecture. There was a cosmic reference to the original peoples of the Americas as Guayasamíndescribed by nephew Helder Guayasamín: “In this case it is a piece whose fundamental reference is pre-Hispanic, it is the architecture of the original peoples of this American continent, about which we in the designing of the Chapel, with Oswaldo, engaged in very intense decisions.”

Guayasamín had the indigenous in his heart, being a mestizo himself. He was self-aware of how important it was to acknowledge his Native American roots, bring them to light, and never forget them. All his paintings were signed with one word, Guayasamín, which in Quechua means: “Flight of the White Bird.” As for Margaret Garcia learning about this, she reflected on her Chicana journey as a woman of mixed Native American and Mexican heritage.

Garcia expressed, “Guayasamín was a tireless artist dedicated in reconstructing piece by piece by every means of recuperating the Ecuadorian history and give it awareness. People are fundamental to who we are. They had to build and reconstruct bottom up. His works were an attempt to salvage his history and culture from death.” Every rescued piece of history and art defied erasure practices by those in power. He is described by art critic Camón Aznar as being the Michelangelo of the vanquished. “His work is dynamic,” adds Garcia.

The use of colours by Guayasamín is often said to have run away from him, while for Garcia, colours run to her. For Chilean Poet Pablo Neruda to encounter Guayasamín’s paintings meant: “Let us think before entering his art, it will not be easy to go back.” His combative spirit refused turning away or to be compressed by painting for the sake of art. If anything his art matched his belief in justice; he lived his art. He created with purpose and made his art instrumental and an informative tool against oppressive colonial and neocolonial spaces; hence he denounced colonialism.

The maestro’s work did not stop at being innovative, stylistic or technically impressive, but was tied to the liberation concerns of humanity. Despite the use of western technique his epistemology was Latin American de-colonial aesthetics. He addresses artists for the sake of life: “The painter, simply because he has a special sensitivity to form and colour, cannot remain indifferent to the dramatic problems of humanity; this is the fundamental
reason why the artist reflects political preoccupations in his paintings.”

Guayasamín exposes those who impede self determination by those struggling against colonization, such as his five large paintings of the CIA, in where he depicts them as monsters with small eyes, myopic beasts with sharp teeth. He transferred encouragement into every fiber of the canvas with every stroke of paint. Garcia connected in many ways with Guayasamin, experiencing the Chicano movement she felt that “to know your community is by painting it.” It was and continues to be her point of inspiration. The meeting between the spirit of Guayasamin and Garcia moved two centres mutually together. It was a continental experience from ‘within’ the Americas that brought two diverse experiences to meet their own similarities. For Garcia, “the maestro left the baton to be taken to where it needs to go. He rescued a lot of the foundational cultural elements necessary to build on. His accomplishments must be acknowledged, his rescue of culture and concerns for humanity are important for the world. His statement today is as relevant as it was yesterday.”

Towards the end of his life, Guayasamín left his last series of paintings, “The Age of Tenderness” (1988-1999), paying homage to his mother, to life, children and peace. It would be a series that signed him off with love and compassion.

Margaret Garcia is a Chicana artist and mentor. She teaches at Plaza De La Raza in Los Angeles, California and curates art exhibitions. Her most recent curated exhibit titled Aztlan: A Sense of Place is part of The Getty Pacific Standard Time LA/LA Latin American and Latino Art in L.A 2017-2018 exhibition.