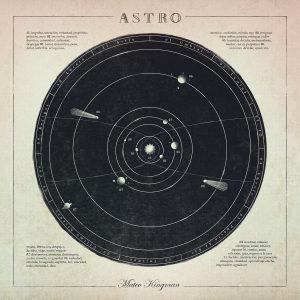 The record opens with “Umbral” (‘beginning’ or ‘threshold’, in English) and it feels as though this is more of a natural dawn, a sunrise, rather than simply the first track of an album.

“Lucero” (‘star’ in English) calls to mind the auroras of the northern and southern hemispheres and floats and reflects along, as opposed to mundanely following a set, three-minute form. He focuses on floating music, considering spirituality and greater themes, of how music and the wider universe understand and inform each other.

Three singles have been released from the album, “Tejidos” (‘textures’, in English), “Religar” (‘re-bind’ or ‘re-tie’, in English) and “Último Aliento” (‘last breath’). In the video for “Tejidos”, we get a sense of the serpentine, other-worldly, mesmerising cosmic flow that emanates from much of the album.

The protection of and connection with the environment is critical for Kingman, who promotes the celebration of indigenous peoples in his home country, Ecuador. In his social media and now also in this new release he drives links to the rich variety of Ecuadorian nature, from the swells of the Pacific, through the 6,000m peaks of the Andes, to the mystery and interconnectedness of the Amazon.

But it is not all celestial contemplation.

There is a pleasing drop three minutes deep in “Astro”, there is the urban riff and hip-hop of “IO”, and the chilled electro of “Religar”.

It is a playful, beautiful album that seems to strive for more than the banalities of regular ‘cosmic intrigue’ records. A good summary comes from Kingman himself, whose description of “Tejidos” could be expanded to describe the overall album. He says it is “a dialogue between the traveller and the snakes/vehicles of the universe”.

Astro is released by AYA Records and available on Bandcamp