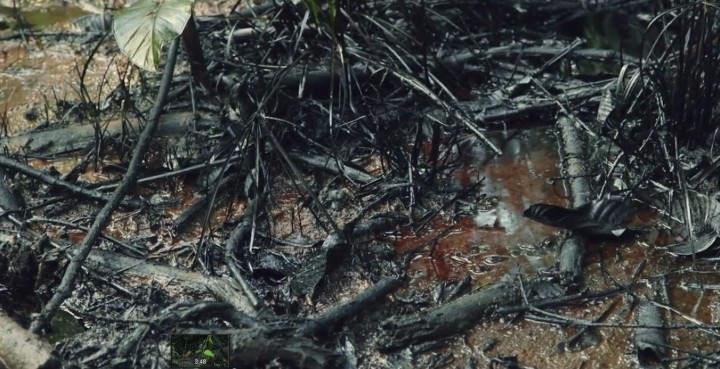 Director Mark Donne’s short documentary covers a 22-year-long battle for legal redress for what Amazon Watch, an independent environmental NGO based in California, describes as “one of the worst environmental disasters on the planet”. The plaintiffs, 30,000 poor farmers and indigenous people in and around the town of Lago Agrio in Ecuador’s Sucumbíos province, are battling the corporate might of Chevron for compensation following Texaco’s casual despoliation of an area the size of greater Glasgow during the period 1964-1992.

Corporate Responsibility in Time of Obfuscation

Chevron, which assumed the liabilities of Texaco when it bought the company, is playing hard to get. The area in question is still soaked and dotted with over a thousand open pits containing an estimated 18bn gallons of produced water, the toxic by-product of oil and gas extraction, yet Chevron claims that on leaving Ecuador in 1992, it completed a $40m “remediation operation” and that the incumbent Ecuadorian government released them from any further environmental liability. Something doesn’t add up.

The legal case was won in Ecuador (2011) and the “afectados” won $18bn in clean-up costs and damages (reduced on appeal to $9.5bn), rejected in the US federal court (2014), a decision appealed by the “afectados”, and separately by international charities and NGOs such as Amnesty International and Friends of the Earth, and was then upheld (2015) when the Permanent Court of Arbitration in The Hague rejected an attempt by Chevron to have the State of Ecuador pay for the environmental damage, and upheld the right of the “afectados” to file their lawsuit against Chevron in the Ecuadorian courts. The province of Ontario, Canada, has even given permission to have the case heard in the Canadian judicial system. But those affected, the “afectados” of the title are, as the film says at the end, still waiting.

The actress Julie Christie recites extracts from Pablo Neruda’s poem, “The United Fruit Company”, a savage indictment of corporate neo-colonialism which turned parts of the continent into an abundance of primary resources which could be plundered with impunity with the ready connivance of obliging despots. “When the trumpet sounded everything was prepared on Earth, and Jehovah gave the world to Coca-Cola Inc., Anaconda, Ford Motors, and other entities.

“The United Fruit Company reserved for itself the most juicy piece, the central coast of my world, the delicate waist of America…

Dr Franklin Ramirez Gallego of The Latin American School of Social Sciences, interviewed in the film, said: “It is about perceiving the territory as empty. Historically, these international companies have perceived the Amazon area and those sites where there are oil riches in our countries as uninhabited territories.”

Of course, the reality is that any territory with 30,000 people in it can in no way be described as empty, unless you have a vested interest in pretending that it is so.

Lord of the Files

Through the testimony of vox pops, such as Norma Pineda, Alijandro Soto and Atilio Salas, activists such as Luis Yanza, president of Amazon Defence Front, and academics Dr Franklin Ramirez Gallego of The Latin American School of Social Sciences and Jeremy Leggett, author & associate fellow of Environmental Change Institute at Oxford University, Donne sets out a familiar story of the poor, the debilitated and the desecrated trying to exert their rights against the wriggling exceptionalism of a powerful corporation that will go to the Nth degree to avoid taking responsibility for it actions.

Remediation clearly isn’t all its cracked up to be as the camera pans across a degraded jungle floor with pools of lustrous water reflecting all the colours of the rainbow, or else alights on lush vegetation coated in black sludge. In amongst the isolated houses and shacks, a pipeline cuts through the abundance of foliage, while red howler monkeys swing through the trees and hoatzins preen themselves against an extraordinary wall of sound.

When Donne’s film first came out in June of this year, Chevron was in high dudgeon. It maintained that Texaco’s methods and environmental standards were “completely in line with the standards of the day”. It was quoted in The Guardian as saying, “If those involved in the production of this film truly wanted to help those affected by current social and environmental conditions in Ecuador, they would seek to hold Ecuador’s President Rafael Correa and his government accountable.” This isn’t helpful as the activities on which the case is based took place during the period 1964-1992. President Correa, who was born in 1963, wasn’t elected until 2007. Something still doesn’t add up.

Despite two courts finding against it, Chevron won’t budge. Instead, it says, as quoted in The Guardian: “The [British] film omits the fact that a United States federal court found that the Ecuadorean judgement against Chevron was the product of “egregious fraud”. It is unfortunate that the indigenous people of Ecuador continue to be used by their government, plaintiffs’ lawyers and activist groups in a coordinated effort to extort billions of dollars from Chevron.”

As in all such cases they can’t both be right. Meanwhile back in the ‘remediated’ jungle the victims continue to endure premature death from cancer and auto-immune illnesses, spontaneous miscarriages and grinding poverty.

Chevron enjoys a market capitalisation of $145.5bn and a long history of environmental degradation. In 2015, it was honoured for its achievements by receiving a Public Eye Lifetime Award.

Neither side can give up for its own reasons, yet what is inescapable is that there appears to be no judicial authority – worthy of the name or power – in an increasingly globalised world that can provide factual, definitive and binding arbitration in such cases. As a consequence, this sorry tale looks set to run and run.

The Afectados is screening in London, prior to every film being shown at the Stories From Ecuador 2015 film series (8th-11th October).