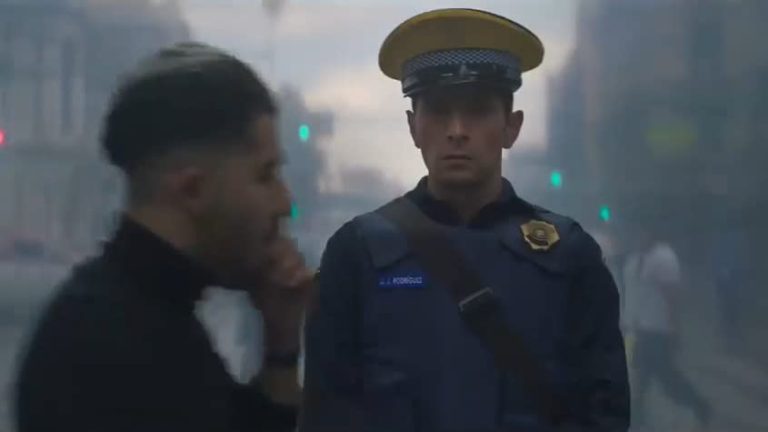 Maria Teresa, and her male partner Montoya, are two officers in Mexico City. Known as the “love patrol” by their workmates, they are both romantic partners and colleagues. A Cop Movie (Una película de policias), Güeros and Museum director Alonso Ruizpalacios’ new work, immerses us in the life of this couple as they share their experiences working the streets of Mexico City and reasons for entering the police force. It is an unpredictable, hybrid film: there is romance, but also the harsh reality of having to navigate the system. Is this a cop show, a documentary, or something else entirely?

Ruizpalacios’ clever film offers us a closer look at the daily lives of those who in many cases, choose this job as a result of necessity, often due to lack of opportunities and systematic racism. As Maria Teresa, points out, most people who want to train as police officers are of indigenous background.

With an average monthly salary of £350, the couple in the film offer us a human glimpse of the difficulties they have to endure in a life where wherever they go, they are hated by the rest of the society and by the same State that they seek to provide their services for.

Recently the Mexican NGO Causa en Común reported that a third of Mexico City police and 10 percent of the police force nationwide, claim that they are forced to pay “quotas” or illegal dues, from their superiors. Those who refuse to pay, can be denied promotions, training and access to equipment, or forced to work longer or more dangerous shifts. Whilst on duty, we witness how Maria Teresa is punished for restoring order and discipline to a noisy night club after discovering that a prominent politician was there having fun.

At the same time, a study into levels of impunity in Mexico by the organisation ImpunidadCeroMx, found that the probability of a crime being reported was only 1.3%. A Cop Movie does not flinch from giving an insight into why so many Mexicans mistrust the police: either because they are victims, have been forced to pay a bribe, or have been attacked by a criminal gang while the police turn a blind eye.

Even when two members of the same family end up working in the same unit there is no guarantee of protection. In another example, Maria Teresa tells of the time her father had to stand aside while she was sexually harassed, one of many instances of misogyny that she has experienced in her work place. There is also constant abuse and harassment from members of the public. The viewer can’t help but wonder why anyone would want to be a police officer in Mexico City.

By the end of A Cop Movie, we discover that what we believed was a documentary is in fact a fabrication, Teresa and Montoya’s story has been re-created by actors Mónica del Carmen and Raúl Briones with the real characters making an appearance towards the end of the film. With the recent deaths of George Floyd and Sarah Everard at the hands of the police in the US and UK respectively, public scepticism for the police force and questioning of its role has never been higher. In Mexico at least, Ruizpalacios’ inventive film finds a way to probe exactly what it means to be a police officer.