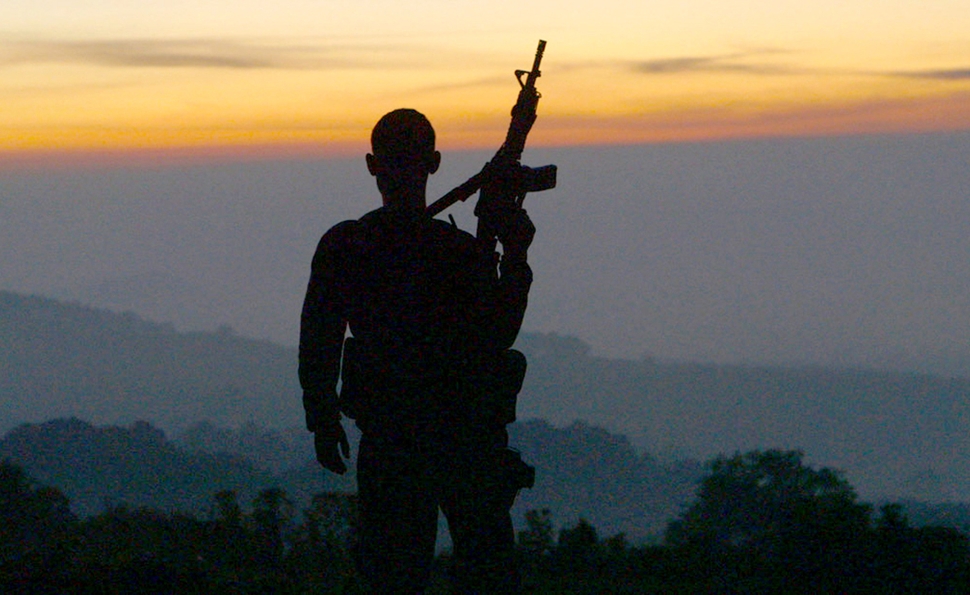 Opening in a menacing jungle darkness, hissing acid and eyes among the trees, hooded men cook methamphetamine. The scrubland chemicals fizz as they chew over their occupation: “we know what we do causes harm in the United States”. A thousand miles to the north, peering through night-vision goggles, a weather-bitten man mutters about the influence of the Mexican drug gangs spilling over the border “this is no longer the USA… we are David and they are Goliath”.

These are the opening scenes of Cartel Land, the latest film from American producer and director Matthew Heineman. At its shivering, gristly core, this is a film that tries to put its finger on the pulse of two groups of vigilantes (one in south-west Mexico, one in southern Arizona) who are challenging the bloody philosophy of the gangs.

Both start-up defence movements are led by tall, striking men, who see themselves as proactive spearheads filling a vacuum created by inefficient law enforcement and a terrifying cartel-created chaos. The Knights Templars are the first villains we come across in the lawless Mexican state of Michoacán. There we are among wailing mourners shuffling on grey dirt grave mounds, burying their relatives. A farmer has not coughed up his extortion fee demanded by the Templars. They have punished him by slaughtering all his farm workers and their children, smashing infants on rocks and throwing their bodies in a well.

This sets the stage for the Autodefensas, the Mexican group with whom Heineman embeds himself and his tiny team. He develops a rapport with the vigilantes as they build support, community by community. The men are guided spiritually and physically by a local doctor, José Manuel Mireles. He speaks in town squares as his team fend off the gangsters and replace the army in the forgotten villages of Michoacán.

In Arizona, we meet Tim ‘Nailer’ Foley and his small band of men. Sharp in camouflage, working his weapons, he stares out across the Altar Valley. We come back to the American self-defence team throughout, but Heineman spends more time developing and laying out the Mexican story. That despite the fact that he only originally planned to tell the account of the so-called ‘Arizona Border Recon’ of ‘Nailer’ and his lieutenants. It was when the director came across news of Dr Mireles in Michoacán that he chose to balance the documentary with both sides of the border story.

There is no narrator and we are guided through the parallel narrative by events, be that the moralising of the vigilantes or the crackle-moans of men being electrocuted. There are chilling scenes with the Autodefensas, and the director bounces in and out of cars, capturing the vigilantes’ shoot-outs with cartel members. In one scene, as the men close in on two leading gangsters, Heineman is understandably running around corners and in the film he has left in shots where he loses focus on his camera, the lens jolting and whitening in the sun. This means the action is not sanitised; we undergo the visceral shock of being in a gun-fight. The two gangsters are captured, reported to have tortured and dismembered relatives of the vigilantes. Cartel Land is raw, it is unfettered, the viewer is wincingly enmeshed in the violence, as one man punches the gangster known as ‘El Cheneque’, hollering and demanding to know where his uncles’ bodies are buried.

The director himself admits he is not a traditional war reporter; his embedding is of a different sort, with groups operating in a blurry, semi-legal world. They assure the locals that they are the good guys, but where vigilantes build up a following they can take on a cult hero presence and with growing sway they risk challenge and downfall. As the narrative develops, we spend more time south of the border and Dr Mireles begins to lose control. His mutinous understudies join a government-sponsored ‘Rural Defence Force’, he is frozen out and forced to flee, his civic leader status is undercut by an unnerving audio recording of a sexual encounter with a mistress. His life is collapsing and he ends the film behind bars, suspiciously incarcerated amid claims of official silencing.

The Mexican heart of darkness has been documented before. In Cartel Land the audience gets a fresh view of the horribly regular themes of torture and extortion through the two counterpoints to a transnational problem. The drugs and guns come and go on both sides of the border and the director shows the community resistance building in the grassroots in both countries.

This is most stunningly illustrated in the cinematography in the two main theatres of action: the Arizonans patrolling the wild wastes of the Sonoran Desert; or the blood-red sunset scenery over Mexican towns, with the hunched shoulders of some young rifleman silhouetted against a empty dusk. It is at turns a darkly comic and distressingly graphic film, and deservedly took home two awards at the Sundance festival earlier this year.

Heineman was at the same sold-out screening of the film, at the Frontline Club in London, as I was, taking questions afterwards. I asked him about the cyclical role the meth lab scenes play, used at the beginning and the end. He explained the tense relationship-building that went into working with the cooks and debunks the Breaking Bad-style glorification. Heineman said he wanted to present the drug manufacturing process as it was, in the half-light, lost in the backwoods. https://krootez.com/buy-real-instagram-followers/

The deceitful tendrils of policemen, politicians, gangsters and vigilantes are exposed then by one of the cooks, who we see at the end sporting a ‘Rural Defence Force’ polo shirt. The incorruptibility of the Autodefensas is never certain and the group’s strategies and members change as the movement grows. The corrupt but, ultimately, unsurprising cycle is complete in this final scene, the drug-running phoenix rising from the tarnished flames of a movement that is turning into the very danger it was formed to confront.

Cartel Land is showing at cinemas across the UK. See cartellandmovie.co.uk for more details.