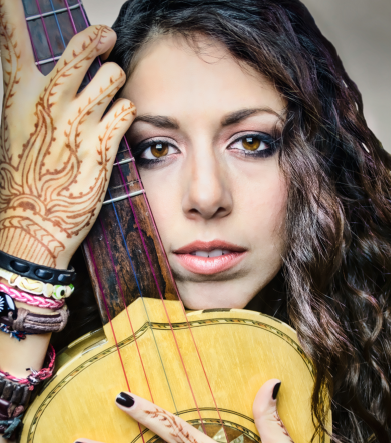 On this International Women’s Day, we’re premiering a new video by the Los Angeles based Alt-Latin singer De’Anza.

A singer-songwriter who hails from Santa Fe, New Mexico, De’Anza represents a growing generation of U.S. Latin Alternative artists who live and create art with a bicultural approach for a bicultural audience. Known for wielding her vihuela (a 5-string Mexican folk instrument) on stage during explosive performances, she has been described as Lila Downs meets Ana Tijoux.

Inspired by an age-old Santafean folk tune, “Si Señor” pays  homage to De’Anza’s hometown roots while seducing listeners with an invite to dance and enjoy the infectious rhythms of life.

Its video features direction and visuals by Ecuadorian artist Jorge Espinosa M. Based on the theme of the four elements of existence—earth, water, air and fire—Espinosa constructsvisuals with props all built by hand. No special effects were used in post-production, allowing De’Anza’s image to complement the visuals, inviting viewers to focus on the music.

So where does this Southwestern native get her inspiration?

“From hip-hop to jazz and everything in-between, there’s no doubt that the United States is musically rich and, like many Latino bicultural homes, I was also exposed to music in Spanish at a very early age,” De’Anza says. “Being that my grandmother was Mexican, it definitely wasn’t uncommon to hear mariachi blasting from the speakers of her boombox. When I began writing music, it only felt natural to also represent that part of me.”

D’Anza is slated to play a string of dates in California and her home state of New Mexico in the coming months. Watch the video below and follow her on Facebook.