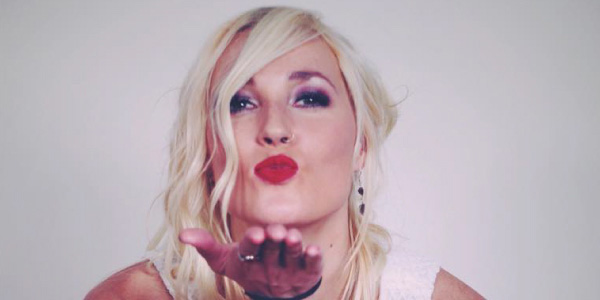 Nothing Wrong with Mixing Cultures: An Interview with Jenny and the Mexicats

The tropical, torrential rain has just began to drop in Mexico City and Jenny Ball, from the multicultural Jenny and the Mexicats, is stuck in a cafe waiting for the storm to blow over and the rain to stop. She’s finally back at home after a string of shows that saw the band embark on a two year journey across the US and Europe, with a pit stop at Washington’s Tiny Desk in between. Her energy is contagious. She’s a courageous English-born bilingual singer, songwriter, trumpeter and front-women for her red-hot strongly Mexican-influenced Latin pop outfit that also includes Spanish percussionist Bernardos, and Mexicans Pantera on guitar and Icho on double bass.

The independent band has been led by Jenny since they met in a flamenco bar back in 2008 in Madrid. Taking the bull by the horns and with a strong sense of self-belief, she plucked up the courage and decided to take the gamble of moving to Mexico City, at a time when she didn’t know a word of Spanish, and give it her all to make something of the band. In her own words “it worked out”. The band have become a pop music tour de force in Mexico, the US and now Europe. They recently released a new single “Bailando dos Flores”, from an equally-new album Fiesta Ancestral which flirts with Latino styles such as cumbia, mariachi and bomba and Latino pop ballads that result in an explosive gypsy jazz fusion.

We spoke to Jenny about their new record, recent tours, where she goes for inspiration and the unbelievable story about how the band was formed. Meet Jenny from Jenny and the Mexicats…

What was the inspiration behind your new album?

It’s our fourth record. We always play with a bunch of different people and always put in what we’re doing at that moment. We wanted to capture the emotion of what we were feeling at the time but with a lot of fire. In this album we really wanted people to dance. Nowadays, due to the internet, people have such a short attention span so we wanted to create something short [the whole album is just under 30 minutes long] but also with plenty of energy.

Why did you decide to collaborate with El Kanka [guest singer on “Bailando Con Las Farolas]?

He’s an amazing singer-songwriter, a great singer from Malaga. Bernardos wrote the song, “Bailando con Las Farolas”, and it just went in full circle. Bernardos was a friend of El Kanka for years beforehand and we were all a big fan of his. The collaboration worked really well, we were all touring and when we reached Mexico city he wanted to sing at the time so we decided to collaborate and sing together. It worked out well.

What was the highlight of your tour across the US?

It’s difficult to say because there were so many. California was great, we got to play at the Roxy Theatre and that was a big deal for us. We thought “wow, we actually got to play there amongst so many other stars who have also played there”. We could tick that one as done for us. But our US tour was interesting, since we’re based in Mexico and there are Mexican people in the band, I feel that there is a lot of racism in the US and a lot of negativity towards Mexico. But in contrast, we were met with a lot of positivity: there were people speaking in both English and Spanish at our concerts and it kind of just put everyone’s problems to one side.

We also played in Nashville which was kind of a deal-breaker. We were a bit apprehensive about playing there because they’re generally known to be a bit of negativity towards the Mexicans. But the whole crowd had a good vibe. It was a representation of there being nothing wrong with mixing cultures. There’s a lot of Latin influence in the US and when people come to our shows, they get to immerse themselves in a bit of their own culture that they miss from back home.

Why do you sing in both Spanish and English in your songs?

We like to promote the English and Spanish language. We speak Spanglish. I like both languages. In “La Oportunidade” for example, it’s a slow, grinding electric show of cumbia and a real mix of Spanish and English. In particular, it’s a sign of how the song grows. We usually do whatever the song asks of us, in whatever language that might be, and it just grows.

How did you learn Spanish?

By being alive. I left England without speaking a word of Spanish and it was much more to my benefit to learn it. I just absorbed it. I started writing songs and translating them from English to Spanish but then it came when I just naturally began to write and speak in Spanish fluidly. It broke down a lot of barriers in our group and brought us closer together. I remember when I wrote a whole song in Spanish and it was a really amazing feeling.

Why did you decide to move to Mexico city?

I originally signed on with an independent record label in the UK but they didn’t really get the concept of the band. The songs we made didn’t really have a lot of presence. But then a manager in Mexico heard it and wanted to put heaven knows into the first album and our first record with him quickly became a gold record.

As an English person, having had the summer of dreams in Mexico City, I wanted to branch out, get out of England and get out of the contract with our previous manager in England. I was first asked if I wanted to venture out on a solo career in England but that wasn’t really what I wanted because there’s something special about being in a band. When I first went to Mexico, I only had an idea of Mexico being a country of cats and donkeys. The band gradually made moves of trusting each other. With each other, it provides the want to go on. I’m really lucky to have a real band. I’m 31, 20 when I started. I was ready to do whatever it takes to make it work, we were really lucky things worked out the way they did.

What are your biggest influences and how do you go about finding inspiration in your city?

Essentially nature. You wouldn’t think it but Mexico has some really beautiful natural spots. There are places where there are three tiers of waterfalls, grasses and horses. Mexico has really got some beautiful things about it.

What does Fiesta Ancestral mean to you?

It’s the name of our recent record. We wanted to show it to be a big fiesta. A fiesta of people. Fiesta Ancestral directly translates to a party of the ancestors. This record is for the ancestors, a party for everyone. It’s a dedication to Selena [Selena Quintanilla-Pérez, known as the Queen of Tejano music is widely celebrated as one of the most important Mexican-American singers and artists of the late 20th century], a homage to her. Of Latin origin, her family lived in the States and she became very big. Her accountant actually killed her. There’s a lot of love for her in the US. We played at the Fiesta dos Flores and played a song for her in her honour. When we were putting the album together, we very much had her in mind.

How and when did you learn to play the trumpet?

I essentially learnt to play the trumpet because my arms weren’t long enough to play the trombone. With any musical instrument, sometimes you just know if you’re willing to put the time in. I actually went to band camp and played it large. I was touring during band camp and went to see the flamenco in Madrid. I met the boys in Spain and met Alfonso Acosta at the flamenco bar where he was working as a waiter. I met him because I had a cut on my foot and needed a plaster and met him then and then later, he introduced me to the other boys. The band all came together because I needed a plaster.

What’s next for Jenny and the Mexicats?

Jenny and the Mexicats are currently touring the US, followed by shows in Mexico. Full tour dates and info on the band at jennyandmexicats.com