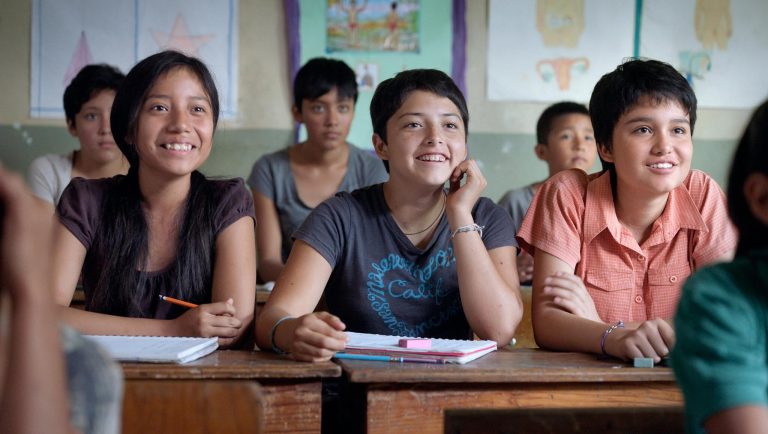 Tatiana Huezo’s Prayers for the Stolen

‘Prayers for the Stolen’: A Haunting Journey of Friendship and Adolescence in the Mexican Mountainside

Prayers for the Stolen (Noche de fuego, 2021) is a Mexican drama directed by Tatiana Huezo, based on a book by Jennifer Clement of the same title. This is the first narrative feature for documentary maker Huezo, and in June 2021 it won a Special Mention in the Un Certain Regard section at Cannes Film Festival.

There are no men living on the mountainside of Mexico’s Guerrera state. Fathers and sons have left for the US in search of a better life, either dying en route or leaving their past, and their families, behind for good. The mothers would have you believe that boys are born on the mountainside. It is too dangerous for girls, owing to the regular visits from local narco gangs from Acapulco, who make their way up to the mountain villages in black SUVs with black-tinted windows, in search of girls to take back with them to the city. To protect their daughters, the women of the villages cut the girls’ hair short and give them boys’ names. At the first sound of a rumbling engine crawling up the mountainside, they hide them in the ground like rabbits.

This film about female friendship and resilience should pride itself on the quietly powerful performances of Marya Membreño, Giselle Barrera Sánchez and Alejandro Camacho portraying the teenage Ana, Maria and Paula, with strong casting bringing excellent continuity from the actors playing the girls in their infancy. Aerial shots of the surrounding mountains and jungle highlight the girls’ isolation from the rest of Mexico, but it is far from a safe haven. When they are not hiding in holes in the ground, the relentlessness of life in such a climate for these women and girls is stark. The stifling heat and ever imminent danger of being stung by a scorpion or other creature linger over the community. The Mexican government are no help to them, dropping paraquat (herbicide) onto the poppy fields and dowsing the girls in poison. For the majority of the film, it seems the world is against them.

Despite this, in some parts of the film the girls do navigate more expected adolescent problems; changing bodies, new romances, and longing for new experiences, including a yearning for city life to bring them opportunities. The film’s aftertaste is one of helplessness for those stuck in a never-ending war on drugs. Huezo’s style of filmmaking lends itself well to shining a light on this overlooked community and their perilous way of life in the Mexican hinterlands. But the story remains a haunting but intimate journey of friendship and adolescence, with all its moments of magic and delight, and benefitting hugely from the newcomer performances and vast, panoramic shots of the landscape.

Prayers for the Stolen is available to watch on MUBI