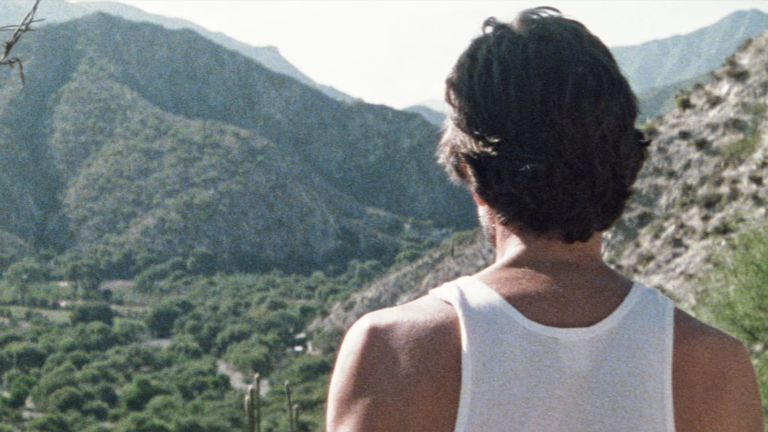 Japón (Mexico, 2002), the remarkable debut feature from Carlos Reygadas, opens to the stuttering guttural sounds of motor engines and hazy gridlocked car lights that glow like stars against the black backdrop of the city night. With the sudden injection of a fantastical up-beat melody, this quotidian scene becomes layered with surrealist meaning, transforming the previously ordinary tunnel that lies ahead into a portal to another time-space. Through the tunnel we go, and we emerge on the other side to a wholly distinct landscape: one that is sparsely populated and replete with rural greenery.

Abruptly, we’re dropped in the midst of a deserted cacti-dotted land. The camera is shaky and ill-angled, and we can hear the heavy breaths and rustling footsteps of the central character behind the lens, firmly placing us in their embodied experience. The camera flickers between subjectivities, a hallmark of the film, to a third-person perspective to bring into focus our protagonist: a weathered middle-aged man clothed in a lumberjack-style jacket, accompanied only by a rucksack and a cane. He is a portrait of solitude amongst the vastness of the landscape.

The weathered man, whose name we never learn, has decided to embark on a journey to the Mexican countryside to realize his final act – killing himself. He finally arrives at a small tranquil village that he believes will serve as the perfect setting for his last deed, where the village Judge arranges for him to stay with Ascen, a grey-haired docile widow. Ascen, is a poor yet welcoming host who offers her stone-walled barn to the traveller where she says he can sleep on her deceased husband’s bed; a minute detail that plants a seed.

From the outset, the hero is mercurial in his behaviour towards Ascen, which fluctuates on a continuum from cruelty through to tenderness. Nevertheless, irrespective of his conduct, Ascen is unfailing in her loyalty and displays unlimited reserves of humanity and compassion towards him. After he takes a winding hike up the rugged terrain, Ascen waits attentively for his arrival holding a tray of tea which she offers to him to cool down; he retorts snarkily saying that he didn’t know tea could do that. Ascen affirms that it is indeed iced tea, and the camera lingers on the helpless yet unphased figure she cuts, continuing to stand and offer the tray. It is her unflinching belief in the innate goodness of others that ultimately stir a spiritual and sexual reawakening within the traveller. We voyeuristically watch him resurrect from his symbolic death as he slowly undoes the buttons of his shirt revealing his body, kissed by the sunset in luminous oranges and yellows like a Caravaggio painting, and touches himself. For the first time in the film, his expression loosens, he smiles, and in that long drawn-out moment, he seems fulfilled.

Slowly but surely, the original rationale for his journey fades into nothingness as he becomes ever more entangled with Ascen which allows him to see life in new colours – a point made viscerally as he begins to paint fervently with richly pigmented, glossy acrylics. Interruptions of operatic music dramatize the seemingly most inane of moments, conveying their significance in the life-world of the hero.

Japón contends with the fundamentals: life, death, love, violence and nature in a poetic and fluid format, with a deft and effortless touch. In one extended passage, school children walk past, starting with the very young who skip and stumble by, and ending with adolescents who saunter past in a brooding manner. To complete the scene, and represent the cycle of life, an elderly couple cut across the camera. The film is deeply elemental; nature takes on a life of its own making it a character in its own right. Storms swirl ominously, the sun rays scorch the barren land, and the rain pounds all that lies beneath. The weathered man is part of the natural landscape, and in this way the film challenges the common tradition of storytelling from a purely human perspective. The metaphysical tone of the film is interlaced with comedic moments that ground the film in in the everyday dynamics of the people of the village, providing moments of much-needed light relief in between the more profound passages.

Japón is a slow burner, but stick with it, because it will surprise you when you least expect it.

Japón is currently available to stream on MUBI.