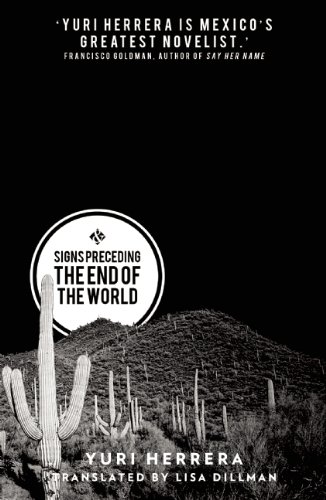 Signs Preceding the End of the World by Yuri Herrera

What instantly grabs you in this tiny sliver of a novel is its twisting poetry, wrought like iron into imagery both beautiful and apocalyptic, only to be sliced by speech that whistles like an arrow.

“Slippery bitch of a city,” Makina whispers to herself, forming our first introduction of the novella’s protagonist. Within the very first page, Mexican writer Yuri Herrera seduces you with the novella’s twin strengths, the poetry of the brutal, and the creation of Makina. She is an Amazon to conquer all Amazons, fluent in both English and Spanish, in control of her desire and emotions, wise to all the shadowy men who are trying to pull fast ones on her. Carried on the tide of Herrera’s language, the reader is plunged into her world, this no man’s land, a town just south of the US-Mexican border, and all its inherent complexities – the trials of identity, language, crime and chauvinism.

Framing these tensions is the all-consuming desire to cross that border, and we follow Makina’s clandestine smuggling into the US, in search of her brother, with little but a scrawled note from her mother in her pocket. It is a story of ample thrill and adventure, but its most moving element is the brevity of the human exchanges, knotted with the desire to connect, both emotionally and physically, and the impossibility of doing so.

Herrera’s work is a double edged sword, poetic for its sparseness, but leaving the reader hungry for more. A highly-rewarding gulp of a novella, jam-packed with all the intrigue of an epic.