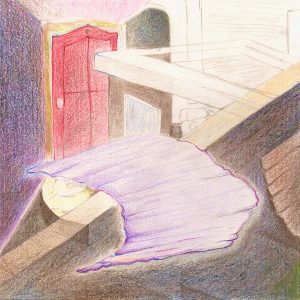 Camille Jackson is one of the few rare precious stones we can find in the singer-songwriter scene in Lima. A soft voice that can get immensely deep, it shows how nuanced and prepared the new generation are.

Camille is Peruvian, but it was in Canada, while studying in the summer, that she started to write songs and play the guitar while watching YouTube tutorials, as she mentioned in a recent interview. She began releasing songs in 2016, with just her and her guitar, songs that showed us how personal and simple she could be. But it was when she got together with Mateo and Ignacio Majluf that we got to see how wide and interesting her imagination can be.

“Intro” is the perfect opener on Lo Que No Ocupa Un Espacio, creating an environment that allows for the next track, “Ya”, to flourish and give you a glance at what this album can truly offer. Musicality is clearly important, but it’s shares importance with the vocal melodies, and the personality that the guitar gives.

Repetition can bore you, but not on this album. The different loops (coming from the guitar, as well as percussion sequences) create a nuanced atmosphere, that is the main character of the album, and also serves as the conductor throughout.

A very subtle samba can be heard in the percussion rhythm of “Mirando Hacia el Sur”, which also gives us some of the most interesting lyrics on the album: “mañana sabré, si mis rincones han cambiado / y si las marañas, se han desenreda’o” (tomorrow I will know, if my corners have changed / and if the tangles, have untangled), which of course sounds better in Spanish.

The lyrics are particularly poetic in “Gloria”, the song that might be the peak of the album. The construction of the phrases reminds us of Blanca Varela’s (a Peruvian poet) style of writing.

It’s very refreshing to hear a young voice singing melodies coming from an experimentation with tondero and other Afro-Peruvian sounds, beautifully written and masterfully mixed.

Lo Que No Ocupa Un Espacio is available on Bandcamp, Spotify and other platforms