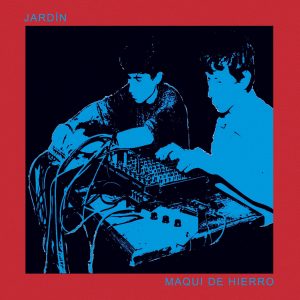 The re-released record from Peruvian duo Jardín is better described as a scientific experiment in musical form.

The themes of hypnosis, confusion and sonic discovery run through this album like an electrical current. Stressful, at times perplexing, it is also a fascinating aural experiment.

The issues of nature are also present – the complexity of the natural world? The horror reality of nature versus the fairytale elements? The title Maqui de Hierro literally means ‘hands of iron’ [maqui is a Quechua word meaning ‘hands’]. But larger topics are present, too, and it feels at times as though you move with the artists away from Earth, exploring deeper realms.

The song titles increase the sense of mystery surrounding this percussion-heavy and split-bit repetition, with swirling, darkened names such as “Serpientes de Humo” and “Perfume de Ceniza”.

Maqui de Hierro is not a regular dinner party soundtrack, serving better those looking to re-discover experimental sounds from Peru. The album was originally released on cassette and it is pleasing to see music from nearly 15 years ago repurposed for a new audience.