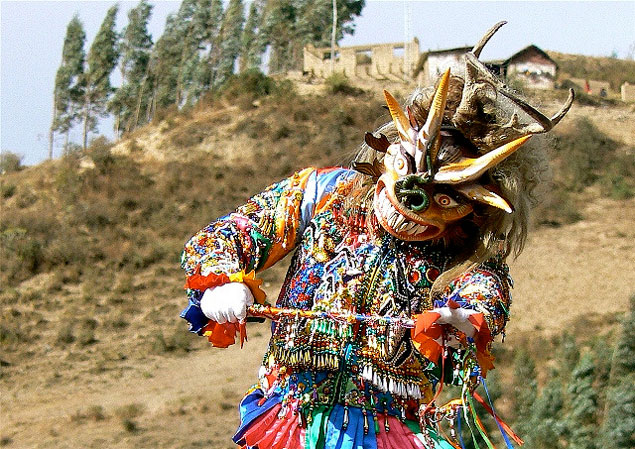 Once a year a town leaves reality behind. From July 15th to 18th; streets, squares and corners of Paucartambo are invaded by fantasy characters: masked buffoons that play jokes to anybody who gets in their way, devils which come from purgatory and hell, native warriors of the jungle, creatures running on fire, among others. Magically, people multiply and fill every nook and cranny; drinking, dancing and praying. The usually quiet streets, where the only sound is the murmur of the wind, soon find themselves engulfed by a symphony of drums, bass, cymbals, violins, accordions and trumpets that travel along them, turning corners and climbing up to the balconies, announcing that it’s time to party because the feast of La Mamacha Carmen has begun.

The noise of the cars and the bustle of vendors have gone when our feet land on the bridge Carlos III, a jewel of colonial architecture built by order of King Carlos III of Spain in 1775. To cross this language of masonry is like a gateway to the past. Suddenly you enter into a town with cobblestone streets, white houses, blue balconies and red tiled roofs. Here the colonial age has become eternal. But it is July 15th noon and the rockets and mortars leave in the mind leave little space for reflection. Then the sirens of the fire trucks start to sound and the Maqtas make their appearance clambering aboard trucks or emerging from unexpected places. They are the jokers of the party and are responsible for sharing naughty jokes with the audience. You can find one almost anywhere and accompanying all the other dances. They are easily recognizable by the pink plaster masks with big noses and colorful chullos covering their heads. The excitement has begun!

Bands can be heard here and there and suddenly the hellish court of Saqras appears with colorful costumes inspired by the rays of the sun and zoomorphic faces. On another street Collas arrive singing in honor to the Virgin with a very soulful and yet festive song. Almost at the same time, Qhapaq Chunchos, decorated with the best feathers and most beautiful colours, make their appearance riding horses also dressed for the occasion. These two ethnic groups are the main characters of the feast. Devotion to Mamacha originated in a clash between these two sides. According to tradition, which is often more interesting than history, the Collas (or inhabitants of the Collao) arrived to Paucartambo with a plaster head found in a clay pot, local people saw the Virgin’s head and immediately gave her a wood made body. In gratitude she chose the town as a place of residence and the people from Puno had to resign themselves to go to worship their patron saint once a year to Paucartambo. All day Collas, Chunchos, Saqras, Negritos, Panaderos, Chukchus, Doctorcitos, Majeños and all other characters dance, play and celebrate around the town. By nightfall, the main square fills with fire. Bonfires burn on the ground and the sky is illuminated with green, red and blue flames that also seem to dance. The music inspires Collas, Chunchos, Saqras and Maqtas to jump over the fire and take with them to any unsuspecting spectator. But Mamacha Carmen is the queen of the feast and all the fun suddenly gives way to a silence as deep as the night of Paucartambo when the prioste with his band of musicians go to the church to offer to the Virgin such a devout and faithful serenade that even the coldest soul joins in.

The party has just begun as the 16th is the main day. Very early in the morning people start to honor their Virgin with masses, processions and chants that Collas as well as Qhapaq Negros offer to their mother. But for Collas singing is not enough and they climb to platforms almost as high as rooftops, throwing toys and fruit to the public, incorporating everyone in the celebration. The music, the laughter and jokes of Maqtas do not fail either. At three o’clock La Mamacha goes out in procession to greet her people and her devotes. Chunchos escort the image while Qhapaq Negros follow the tour with a song that seems to come from the soul itself, and Saqras hide in roofs and balconies. On the 17th all groups remember their dead partners in the cemetery and dance to please the prisoners outside the jail. A new procession culminates with the blessing of the Virgin from Carlos III Bridge; and he returns her home until next year. The highlight of the celebration and the act expected for everyone is the ceremony called “La Guerrilla”, an allegory of the clash between antisuyanos and qollasuyanos. Qhapaq Chunchos always win and keep the image of their mother for another year. Saqras go out carrying their cars of fire to take those who have fallen to hell. But the party does not end and all the people dance and sing all night.

Peru is a country of living cultures and Peruvian people dance throughout the year but the feast in Paucartambo is unique because of the almost mystical respect for traditions, the emotion that causes in the visitors the devotion to a Virgin which everyone recognizes as a mother and the music that deepens the soul day and night.