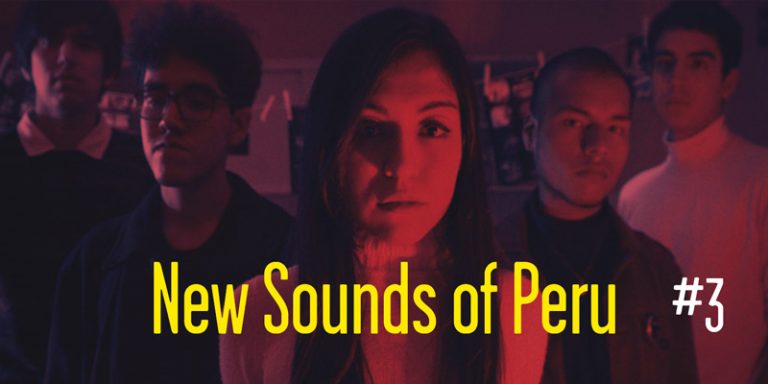 Ana Claudia Bendezu returns once more with another selection of her New Sounds of Peru, a Spotify playlist featuring the best new music from Peru. Listen to the latest playlist below and find out about the newest additions further down:

Find out more about the latest additions to the playlist, and check out their videos, below:

After releasing a couple of singles this past year, we can finally listen to Camille Jackson’s debut album Lo Que No Ocupa Un Espacio. “Gloria” can be listed as one of the most interesting songs from a group of tracks that deserve more than just a small mention here. The melody in the guitar, a constant that matches perfectly with the sound of a more and more present tondero, is beautifully accomplished.

The 70s feeling is back in this new track by Santa Madero, showing once again how they are a very young band with a rare old soul. The third single builds up the expectation for their upcoming debut album.

Seasoned post-punkers Mercury Toys bring us their second single of the year. A powerful rock song with a catchy chorus, a rarity in the current Peru rock scene.

The quirky Lunar Pats plays with pop and r&b on “Melatonina”, a single from her very first EP Transmisiones.

Brilliantly, A.C.O. talks directly to our generation: “clava las uñas en tu sueño / no lo alquiles a otro dueño / es lo único que es tuyo como el tiempo”. A soothing melody that wraps around one of the finest lyrics that has come out of Perú this year.

Purportedly the first taste of their next album, “Nube Negra” is sexy and also exciting. The different textures in the harmonies adds even more richness to the song.

This type of collaboration is what we so desperately need in the Peruvian music scene. Nothing better than a crossover between indie cumbia and a reggaetón singer.

Fifteen years later, we found ourselves listening to what can be called the continuation of Wendy Sulca’s very first hit, “Cerveza, Cerveza”. Miss Bolivia 🇦🇷 and Maca del Pilar 🇨🇱 were called to add their cumbia from the south to Wendy’s latest single, where they reaffirm that women can drink for whatever reasons they feel like.

With the feeling of having a little bit of everything in the mix, “Espinas” shows us how diverse and expertly put together are Shck’s influences.