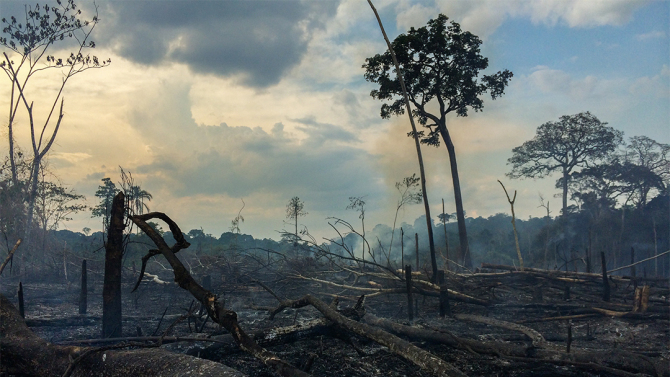 Gatekeepers to resource abundant regions, indigenous peoples are frequently on the frontline in confrontations with the multinational extraction industries. Filmed across the other side of the Americas, the documentary When Two Worlds Collide depicts this all too familiar narrative. It follows Alberto Pizango from the Irapay community and a native speaker of the Shawi language, in a battle between Peruvian indigenous groups and the government of former President Alan Garcia.

In their first feature-length film, Heidi Brandenberg and Mathew Orzel artfully document the conflict that arose in December 2006 when indigenous peoples rejected a bill proposed by the Garcia Administration known as ‘The Law of the Jungle’. Garcia had attempted to introduce Forestry Law 1090 which would open up the Peruvian Amazon rainforest for drilling, mining and logging by multinational companies. The law removed some 45 million hectares of Peruvian rainforest from the government’s list of protected lands.

This was part of a range of legislative measures designed to make Peruvian law conform to the Free Trade Agreement (FTA) signed with the United States in 2007. According to the film-makers, within a year of the FTA being signed, 72% of the Peruvian Amazon had been earmarked for oil and gas concessions. Some of the laws specifically eliminated the communal property of indigenous groups.

In footage filmed at a press conference Garcia implores, “We need larger investments in oil, gas, mining. That’s why I invite you to invest in Peru. American entrepreneurs, bring your factories!”

Beginning with peaceful protests, the conflict swiftly escalates when indigenous protestors shut down part of the oil pipeline in Bagua leading to a violent fracas with police and military in which more than 30 died and 50 were wounded.

Pizango is a captivating presence in the film, stoic in the face of his arrest and exile to Nicaragua after the Peruvian authorities attempt to prosecute him. Fighting for the right of indigenous communities to live in dignity and for their territories to remain intact, he is the President of AIDESEP, an NGO which represents Peruvian indigenous peoples. Although 13 days after the confrontation the Peruvian Congress voted to suspend the Forestry Law and repeal another related law, for Pizango it is but a partial victory, doing little to dent a decades-long trend of under-the-table deals with multinationals which continue to erode Amazon territories.

Scarred rainforest landscapes, felled trees and rivers coated with cloying crude oil provide a haunting contrast to the exuberant lushness of the untouched rainforest. In a visit to a local health centre, we are shown how communities living near the affected rainforest are experiencing health problems from the accumulation of carcinogenic chemicals in the water.

In today’s post-COP21 milieu, viewers may be well accustomed to seeing visions of environmental degradation, but in the lucid, high-resolution cinematography of When Two Worlds Collide, never do they lose their power to shock. It is a well-trodden narrative, but no less powerful for it.

Through interviews with government officials, protesters and other civic actors, Brandenberg and Orzel reveal deeper problems about indigineity, statehood and (post)modernity sitting uneasily beneath the surface. Indigineity and modernity are presented by elites in the documentary as opposing, even contradictory concepts. Indigenous people (los nativos) are apparently in the nation, but not of the nation. In an emotionally resonant scene, after the conflict at Bagua one protester laments “The police are called heroes because they fought against an enemy. But what does that make us?”, in words which underscore the dissonance between state and indigenous community.

Government officials in the film appear to suggest that the resistance of indigenous groups to resource extraction is indicative of opposition to Peruvian economic development more generally. Opening up Peru to multinationals is presented by elites in the film as a step in national progress, part of a grand project to engage with the developed world beyond.

Meanwhile, it is assumed, indigenous people are to be celebrated purely as cultural artefacts, rather than contemporary political actors to be consulted on equal terms. Garcia’s attitude is most telling as he delivers a televised statement on the violence at Bagua, comparing indigenous attitudes to those of the 19th century, adding that “they gathered armies in the most backward parts of our nation.” One of the pro-police protesters later exclaims “I consider them third class, uncultured people.” After the deaths in Bagua, then Peruvian Minister of the Interior Mercedes Cabanillas declares flatly on television, “Frankly they are savages”. Yet curiously even the title of the film seems to accept a fundamental separateness of indigenous and non-indigenous people.

When Two Worlds Collide stands as an impressive, visually arresting reminder that efforts to protect the earth’s resources from continued depletion must come by empowering the indigenous communities who live in them. This raises questions about sovereignty within nation states. As the film exposes, political elites beholden to international companies will often make rhetorical claims to progress and national advancement to justify resource extraction in their own backyard.

In contrast, indigenous groups invoke a broader vision of the importance of the rainforest beyond border, market and nation. They expound a philosophy of the rainforest as a resource to be cared for, rather than exploited. As Pizango declares in the opening scenes, “My father always told me that the earth was borrowed, not given to you to do as you please. We must hand it to future generations in even better condition.”

At the end of he film, he declares, “We’ll fight so the rest of humanity will have the rainforest.” But the burden of protecting the earth’s most precious resources cannot be borne by these communities alone. When Two World Collide is testament to the need for more emphatic, urgent action to curtail the operations of the extraction industries and the governments who enable their activities. This may not be a novel theme, but it remains blisteringly prescient.

When Two Worlds Collide is currently in UK cinemas. More information can be found at facebook.com/whentwoworldscollide