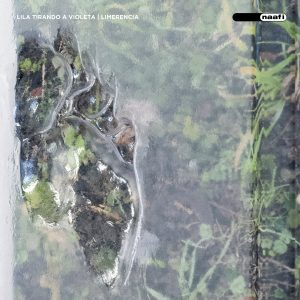 Montevideo-born Camila Domingue, who records as Lila Tirando a Violeta, made waves in the club scene after creating heavily-sampled vaporwave tracks influenced by ambient and hardstyle, and performing at pride parades as one half of pop duo A.M.I.G.A, who combine performance art and pop culture. Her most recent release – and her first on Mexico City’s NAAFI label (Tayhana, Gaika, Wasted Fates, MC Bin Laden, Zut Zut) – is an experimental, cerebral and heartfelt record, featuring collaborators Nick León, PRJCTN, PLXYBXY and more.

With wailing sirens weaving throughout the record, accented by metallic scrapes, mechanic tones and rhythmic drums, Lila creates a distinctly urban landscape on Limerencia. Yet the tracks are meditative and calming for an active mind, with birdsong, chimes and city sirens lifting the darker sounds into a more magical soundscape. It makes sense that the album was composed during a process of physical recovery, in which Domingue was undergoing neurological medical treatment.

“Noche Totém” has you yearning for nights in a dark club and falling in momentary love in a smoking area with ringing in your ears – fitting considering listeners haven’t been out for five months, and perhaps a glimpse into Lila’s heart as she made this record in a period of treatment and recovery.

Bass notes in “Maldoror” are healing, the alt-Latin drum has a wholeness you don’t find in club music the world over and the glimmering swish of sharpening knives here takes on a new, surgical edge. The bells, sloshing water and children’s play on “Flores & el Mar” are a dreamlike musing which is comforting, but hard to place.

The track names are eye-catching: “Alien Ciego” (“Blind Alien”), “Mariposas y Fuego” (“Butterflies and Fire”), “Dry Season” – but this is not for feigned individuality, rather, they offer a sense of mindful wandering.

There is a poetic sadness to certain tracks, as with the final “Lagrima Viva” (“Living Tear”), where Lila speaks lyrically about weeping, in the sibilant susurros of her Uruguayan accent. But in all, there is comfort to be found in the tones of this project. The urban environment, sharp and busy, is also a space for relative peace.

This is a captivating piece of work that firmly places Lila Tirando a Violeta within a roster of leading global club producers. There is such a variation of feeling, even within one track – as with “Noche Totém” that begins with sleepy chimes and ends with a near-donk frenetic beat, brought on after fearful breaths and the feeling of drowning in sleep – that Domingue gets to show off a full range of imaginative and precise production techniques.

Limerencia is released by NAAFI and available on Bandcamp