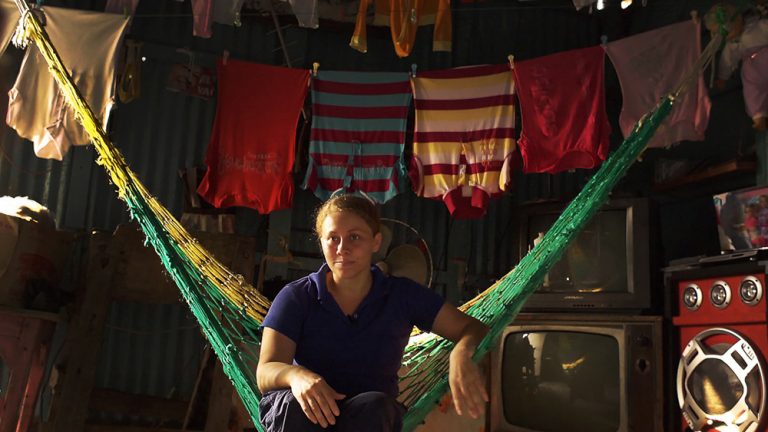 An image from 'Once Upon a Time in Venezuela', dir. Anabel Rodríguez Ríos

An Interview with Anabel Rodríguez Ríos, Director of ‘Once Upon a Time in Venezuela’

Once upon a time in Venezuela (dir. Anabel Rodríguez Ríos, 2020) was Venezuela’s official selection for the Best Foreign Film category of the 2021 Oscars. The documentary paints a sombre portrait of a sinking nation. Perched on stilts, the fishing village of Congo Mirador is on the verge of sliding into the mud, due to sedimentation – and its community is fading away with it. Once Upon a Time in Venezuela shows Congo Mirador through the eyes of two women with opposing political views. In this interview, director Anabel Rodríguez Ríos addresses her choice of characters, the challenges of filming in an environmentally and politically unstable setting, and the situation the younger generations of Congo Mirador – and Venezuela as a whole – are facing.

In the documentary, national elections are approaching. Mrs Tamara, a fervent admirer of Chavez, responds to the community’s devastating poverty by bribing the locals to get votes for Maduro. On the other hand Natalie, the community’s only teacher, believes her village has no hope without political change. She is not afraid to speak up – but this comes with a heavy price.

Could you comment on your choice to focus on these two characters?

At the beginning of the process we were approaching the community’s situation from the perspective of the kids, and at that point Natalie Sánchez, their teacher, bridged the gap between us and the community. She also helped us understand their needs in a village threatened by sedimentation.

When we found out that Natalie and her household were being excluded from the subsidy system coming from the government (boxes of subsidised food, telephones, etc.), we became interested in understanding how the community’s power structure worked.

We quickly discovered that the local leader, Tamara Villasmil, controlled most of the village’s resources. We found out she wanted to replace Natalie with another teacher: one that was part of the government party for which Tamara was an activist.

However we also discovered that Tamara was the only person that was actually advocating for the village and demanding the assistance of the government to deal with the issue of sedimentation.

I found the young girl, Yoaini, a particularly powerful character. Could you tell us how younger generations are affected by the situation in Congo Mirador?

The displaced children and young people of Congo Mirador, and of Venezuela, suffer from a situation in which food and medical supplies are scarce, and the little resources they have are thanks to the efforts of civilians. Children are malnourished, suffering from all sorts of illnesses and dying.

Kids in Congo Mirador and the rural communities of Maracaibo Lake are considered a workforce as early as the age of 10. Girls are considered sexually active as soon as they get their period and get pregnant as early as when they are 11 years old.

Yoani resisted becoming a girl considered sexually active as long as she could. Now she is 17 years old; she lives in an inland fishing village called Barranquitas and is in a relationship with a much older man on whom she depends. Our communication nowadays is through her cousin’s Facebook account; as Yoaini has not yet learned how to read or write, her cousin writes to me.

How did you manage shoots in a village sinking due to sedimentation? And how did you build trust in the community?

It was possible to shoot mainly because of the support of the locals. It is challenging for people used to an urban environment to be in conditions such as the ones in Congo Mirador, but we adapted.

In our third year working in Congo Mirador, the village came under the control of a paramilitary group. Dealing with them was a serious challenge. However important this was to explain what the destruction of a society means, we decided not to film this for the safety of the local people and for our own safety. We were able to keep following the characters’ stories in agreement with these paramilitaries.

As families are driven away by rising waters, they are forced to give up on their village and leave. Is the situation in Congo Mirador unique? What sort of hope do families of villages such as Congo Mirador have for a better life in Venezuela?

The situation we portray in Congo Mirador mirrors our situation as a whole. We are a devastated society, having been divided, polarised and devoured by populist practices, nowadays living in a system that is politically totalitarian and economically a total chaos that millions of us are not able to cope with.

The sedimentation is just one of many structural problems in the sociopolitical system.

To me, hope for the people of Congo Mirador lies in the people themselves, who could rise from the ashes of their own burned-down village and be reborn into a new form of community. In the village itself, there are no more than five people left, but spread across the region there are hundreds of people who have been displaced from Congo Mirador. They still have their own culture and ways of living. Perhaps the hope for Congo Mirador’s people is to somehow continue as a culture even without having a village to call their own.

Find out about upcoming screenings of Once Upon a Time in Venezuela via the film’s website.