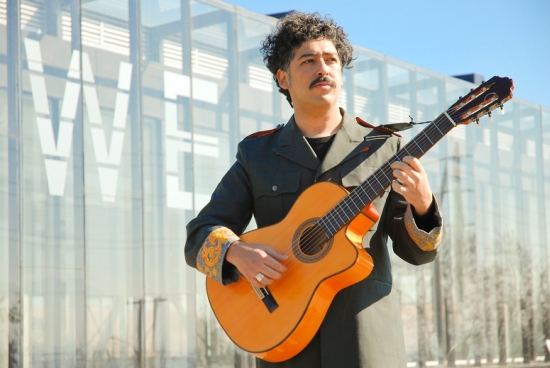 Chilean singer-songwriter Manuel García has announced a European summer tour which will see him take his fluffy-hair and acoustic guitar to the stage in Sweden, France, Belgium and Spain, with more gigs expected to be announced. Unlike his nu-folk compatriot Nano Stern, who will be playing the Womad festival which runs from 25 – 28th July, Manuel hasn’t announced any UK gigs so far although, if we’re being honest, surely it’d be more fun to go and catch him in France or Spain anyway.

A contemporary adherent of la nueva canción chilena, the socially-aware folk movement pioneered by the likes of Violeta Parra and Victor Jara, García is one of the biggest names on the national scene and has been referred to in the Chilean press as El Comandante del Folk Chileno. It’s a phrase which reflects the political connotations of the music and, while García himself is not in the same militant vein as the likes of Jara, the music is a style that identifies with the political left in Chile and continues to produce new generations of singers, such as García, Stern, and more latterly Chinoy and Kaskivano.

Garcia’s career began in the folk band Coré, before moving into the rock scene in Mecánica Popular, but it was his debut solo album, Pánico, in 2005 which saw him make his individual mark. He has worked with a vast array of Chilean musicians and paid homage to the icons of Chilean culture in his music: Parra, Jara (he released an album of Jara songs recorded with the Symphonic Orchestra of the University of Concepción) and Pablo Neruda.

The European tour begins at the Midsummer Latino Festival in Sweden in late-June and the next two weeks will see him squeeze in dates in the aforementioned countries, with possibly a few extra, before heading back to Chile to embark on a northern tour of the desert regions. Here are the confirmed European dates: