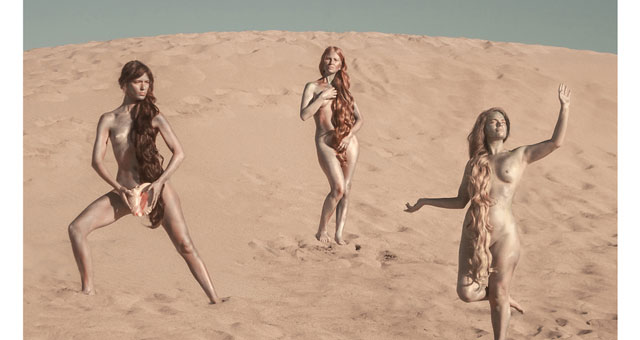 Argentine trio Fémina have given fans “Arriba,” a song about “shedding old skin to understand what’s beneath it.”

Produced by Quantic and recorded at his New York City studio, the track is a preview to their forthcoming album, Perlas & Conchas. Due out on April 5, the record will feature a collaboration with Iggy Pop.

Fémina is made up of Clara Miglioli and sisters Sofia (Toti) and Clara (Wewi) Trucco. The trio grew up in San Martín De Los Andes in Patagonia. After moving to Buenos Aires, the trio gained popularity locally very quickly, many fascinated by how they seamlessly combined hip hop and traditional Andean rhythms.

“Arriba” begins with their voices in harmony over guitar before a soulful hip hop beat sets the mood for the rest of the track. We especially love this lyric:

The track was the first written for the album, per the band’s statement:

“Arriba was the beginning of a new creative process for us. It was the first song we composed on the album. We wrote it as a part of an ‘exquisite corpse’, a surrealist writing exercise, and that’s when the three of us started to composing together for the first time, as we often used to compose separately. We united our minds and hearts together, which was a great challenge and a new creative process for us. The song speaks about deconstructing oneself, changing the established ways, and going to new places. It takes about finding ones true self. This song references the ancestral, our roots and our earth.”