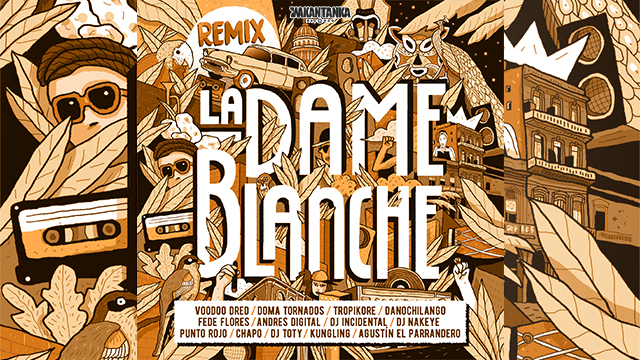 As the year came to an end, 2 new productions were released by Wakan Tanka Records, a label based in Europe but formed by Latin American talent that we talked about a while ago, during the visit of La Dame Blanche in Mexico where I had the opportunity to see their show and have a chat.

They followed up a release by La Dame Blanche with an album of remixes of her songs, by DJs and producers active in the global bass scene from various parts of the world, amongst them Andres Digital, Punto Rojo, Tropikore and many more. All tracks deal with different musical styles fusing hip-hop, Latin rhythms, world and electronic music. The last track is a cover recorded by Agustin el Parrendero from Santa Fe, Argentina giving it a touch of cumbia villera.

They followed this with a release by Ego.360 – Emiliano Gomez’s alias, who is also the label’s director. The name of the album is Urbanología en Clímax; in this project he shows us a different side to him where he experiments with different contemporary urban genres, leaving a characteristic touch of cumbia. In all eight tracks you can hear hints of trap, moombahton, dancehall, hip-hop and more. He’s even thinking about releasing a video for each of the tracks, the first was for En Mayo ft Mas b (instrumental dub), which was created by Juanmerod in Mexico City and which you can watch below: