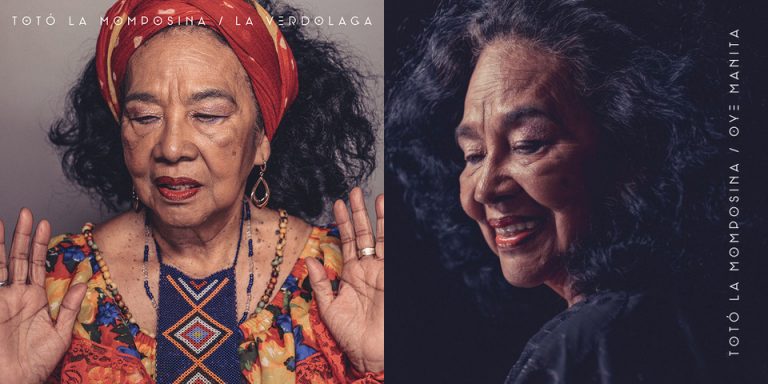 Is it just us or has this past summer been a busy one for Totó La Momposina? Let’s be straight, she’s not a performer to sit still, regularly performing around the world, but in terms of new releases, it’s been a pretty big year. There have been three releases of previously-unreleased material from the 80s and 90s, a new compilation on vinyl and even a sneaky collaboration with a Brazilian musician. Weird then, that these releases seemed to have passed by quite unnoticed.

First up, let’s talk about the most exciting release of the series (for us, at least), which is the release of Oye Manita, a collection of recordings that Totó made going back to when she moved to Paris in the 70s. It’s very much a continuation of the retrospective series that began with the release of Tambolero on Real World in 2015. Whereas that album featured tracks recorded while in London, this one goes back slightly further to those early days in France when Totó was taking little-known styles such as cumbia and bullerengue to international audiences for the first time.

Oye Manita is released by Astar Artes and available from Bandcamp as a CD release with extensive liner notes.

Astar Artes are also behind the release of Fuego, a digital-only EP which includes further tracks from the Tambolero sessions, which took place in Real World Studios in 1991-92. They have also collected together tracks from both Tambolero and Oye Manita for a special vinyl compilation titled La Verdolaga, featuring some of Totó’s most powerful compositions of the past 30+ years. They’re all releases that offer the chance to hear Totó in the prime of her career, singing some of the songs that cemented her reputation as the Queen of Cumbia as well as many lesser-known, but equally potent, tracks.

On a final note, we also wanted to big up this new collaboration between Brazilian musician grassmass and Totó which took place at the Red Bull Music Studio in São Paulo. Together they recorded one of Totó’s most emblematic tracks, “El Pescador”, stripping away the cumbia rhythm for a harder-to-place pattern (to be honest, we’re not sure if it’s a rhythm from Pernambuco, direct from Africa, or a mix of Africa, Brazil and Colombia) that seems to explore both the African and indigenous heritage of the song. It’s one of those rare versions of a track that manages to both complement the original as well as offer something new. The track, which also features Guilherme Kastrup (best known as Elza Soares’ current producer) on drums and Mestre Nico on percussion, is available on Spotify. Check it out below: