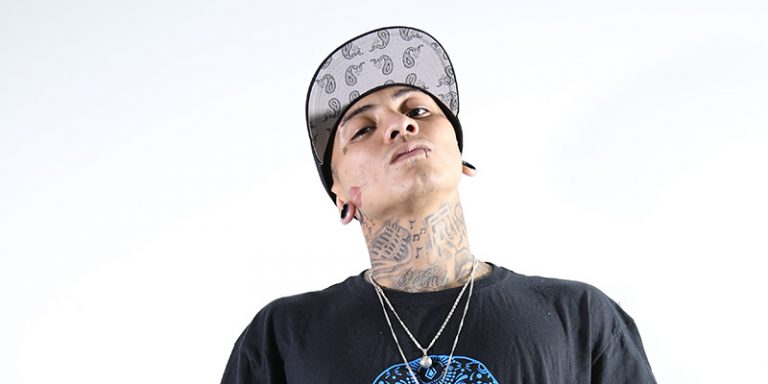 Irving Ramirez, better known as El Pinche Mara or Mara, is a rapper from the city of Merida, Yucatan, Mexico. He started out in gangs at just 10 years old, getting involved in diverse criminal activities, while at the same time developing a taste for rap thanks to the influence of his older brother, an MC recognised locally and who years later was killed in a gang fight.

Mara continued to write and record songs relating to the life he had as a gang member. In 2015, he began working with the independent label Da Players Town after serving a prison sentence in Merida, moving to the city of Guadalajara. Today, Guadalajara is one of the most important cities in Mexico’s hip-hop/rap scene, being the launchpad for several talents.

In Guadalajara, Mara began to work professionally, releasing the albums Más Locos Que Simpáticos and Tumbando Coronas in 2016. During that year Mara had shows in more than 20 cities, and in addition was nominated by the most important hip-hop magazine in Mexico, Ritmo Urbano. At the moment Mara has more than 70 million views and more than 300 thousand subscribers on his official YouTube channel.

The new single from Mara was released a few weeks ago titled “With Calmness” and is taken from the album Tumbando Coronas. The lyrics relate Mara’s experiences and lifestyle on the streets and in prison. The beat was made by Pars Beats, and mastered by Bial Hclap in Handiclap Records’ studio. The video was recorded in various locations in the city of Guadalajara including a concert venue and a set recreating the prison of Mérida. The video director is JDC Juvera and editing was done by Flips Mora.