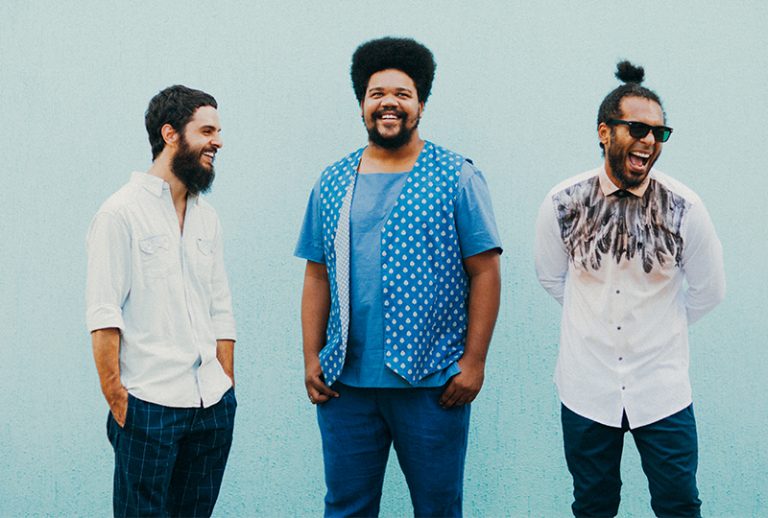 Hailing from Recife in north-east Brazil, Amaro Freitas’ sound not only blends different styles of jazz, but also infuses the genre with accents of maracatu, frevo and baião – musical styles that have emerged from the north-east’s indigenous and black cultures. This captivating medley of textures and rhythms has brought the group to the attention of national and international music scenes.

Amaro is an exceptional pianist, who first discovered his love for the piano when he played in his father’s church group. His natural ability led him to the prestigious Conservatório Pernambucano de Música (Pernambucan Music Conservatory), although his formal musical education was cut short due to financial difficulties. Learning his trade in the clubs of Recife, he sought out his current collaborators from the local scene. His talent is well paired with smooth licks from double bassist Jean Elton and drummer Hugo Medeiros.

Kicking off the set with the album’s opening track, “Dona Eni”, the trio took no time at all to fill the club with their hypnotic rhythms. This piece offers a punchy revision of a baião rhythmic structure, played in seven measures instead of two. Despite the complexity, Amaro, dressed in a sky-blue kaftan, appeared a vision of calm as his hands worked the keys with a natural ease. The first half of the set continued at a high tempo, allowing the trio to showcase their dramatic, heavily percussive approach to jazz.

Whilst Rasif is a perfectly-produced and balanced studio album, in their live performance the trio took the opportunity to riff and experiment with their instruments, effortlessly tousling between themselves whilst exchanging smirks and glances across the stage. Of course, for musicians seasoned in Recife’s legendary jazz bar, Mingus, working a crowd is second-nature to them. After a rendition of “Paço” followed by a bossa nova infused transition, one member of the audience gave an impromptu standing ovation and blurted out, “F*cking excellent!”.

After a fast-paced opening and first half of the set, the trio brought some calm to their performance, lulling the audience with the title track, “Rasif”. A serene homage to the coastal line and ecosystems of Recife, the soft piano tones and delicate percussion created a tender atmosphere in the club. Comparing the first and second half of the set highlights Amaro Freitas’ mastery of a wide range of musical registers, from biting staccatos through to smooth harmonies. This group is not only versatile in the styles and structures of jazz that they adopt, but also the environments they create through their music.

Amaro Freitas’ trajectory from the church hall to the international music scene has been one filled with many hurdles. Yet, the trio’s talent and unique sound have ensured that they are now receiving the attention that they deserve. It was a pleasure to see these masters at work, as they brought some of their warm, coastal energy to a wintery London night.

Rasif is available now on Far Out Recordings