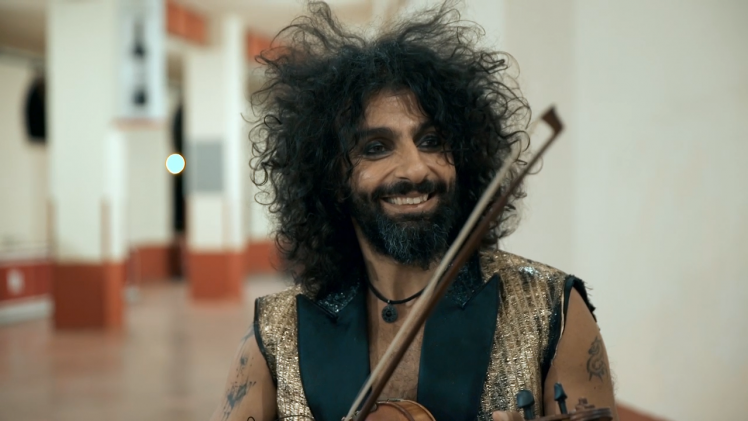 Ara Malikian: A Life Among Strings

Does history repeat itself? This is the question implied throughout Spanish director Nata Moreno’s first full-length documentary A Life Among Strings, produced by Kororo Films about the life and work of internationally acclaimed violinist and composer Ara Malikian. The film opens as a surreal trip to the past, a steampunk music box plucked from the attic of a Mad Max future, at the same time alluding to the tragic Anatolian desert of 1915. Details spring to life in the collages of old printed photos, precious for the adversities they have endured through each generation.

Malikian’s story of survival begins long before he is even born, as a descendant of an Armenian grandfather who escaped genocide as a teenager, slipping out of Turkey into Greece with nothing more than a violin he could not play, before settling in Lebanon. Half a century later, in the midst of the Lebanese Civil War, Malikian must also leave home as a teenager. Like his grandfather, he starts a new life carrying a violin. The difference is Malikian never stops playing, and the music leads him to new chapters in Germany, England, Spain, and on the world stage.

The film’s discourse is a timely and relevant challenge to contemporary narratives about migration and nationalism, by appealing to our imagination above all else. In oversimplified terms, string theory suggests the existence of multiple physical states that challenge our regular perceptions, infinite possibilities all existing at once like the location of a vibrating chord. This is something like Malikian’s place of origin. Being from all places, being from nowhere, those around him struggle to describe whether he is Armenian, Lebanese, Spanish, something else — something dangerous even? His interlude passing as a klezmer musician calls to mind the cultural vertigo described by Uruguayan musician Jorge Drexler’s in his talk “Poetry, Music and Identity” where he recounts the words of Spanish cantautor Chicho Sánchez Ferlosio: “I am a Jewish Moor living among Christians / I don’t know who my God is, nor who my brothers are” while tracing the rhythmic tradition of the décima, a key element of flamenco, across centuries and continents.

Yet Malikian knows exactly who he is and explains he has grown comfortable navigating the in-between spaces, despite the pain and exclusion they so often represent. And he has hope that his son will not be faced with the same difficulties, even though it is hard to say whether the current generation is truly better off. The civil war in Syria that has displaced over 6 million people since 2011 (according to UNHCR) is not so far from where the atrocities which marked his grandfather’s life took place. The migrants risking everything to land on the northern coast of the Mediterranean are not so unlike Malikian himself, sent away for a chance to survive.

History does in fact repeat itself, but Malikian insists, we are not doomed to play the notes the same way we are taught. Despite all adversity, we are free to choose how to manipulate the strings. “Your story is important,” Malikian says. “Defend the best version of yourself. Put all of your will into achieving it, for your example will light up your people. It will light up your life. And it will make things change.”

Ara Malikian: A Life Among Strings will be screening at the Raindance Film Festival in London (18th-29th September 2019). Tickets available from Eventbrite.